However, the messages in that example were transmitted within a certain frequency. In the following, we will transmit messages according to user input.

As before, we will use the previous sketch and add code without removing the previously added functionality.

From the previous chapter’s sketch, I removed (actually, I commented out) the following code:

The new sketch now contains a function call ReadSerialMonitorString that returns the text string the user entered plus the length of the entry. For the network scan I chose “s” as the command. Consequently, the code looks like: 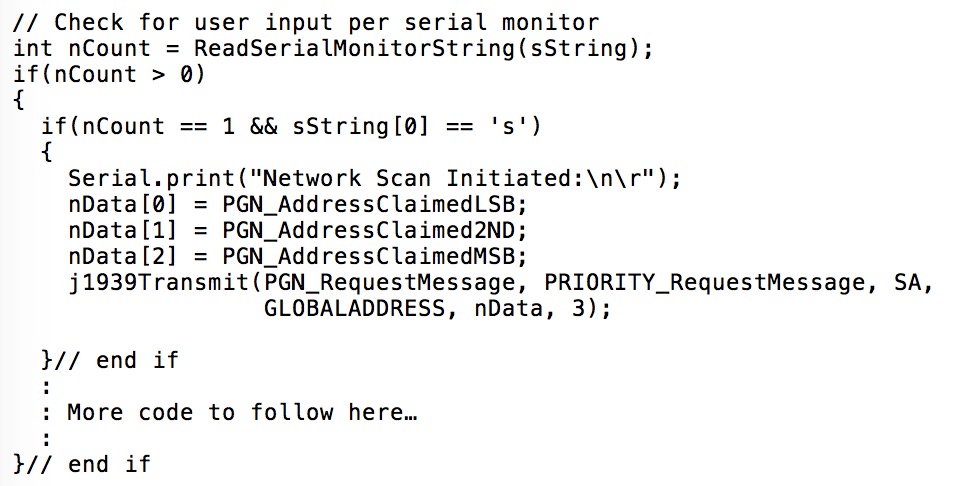 The following screen shot shows the same result as in chapter J1939 Network Scanner, but, for the sake of adding some more information, I have added the code to print the control application’s NAME. 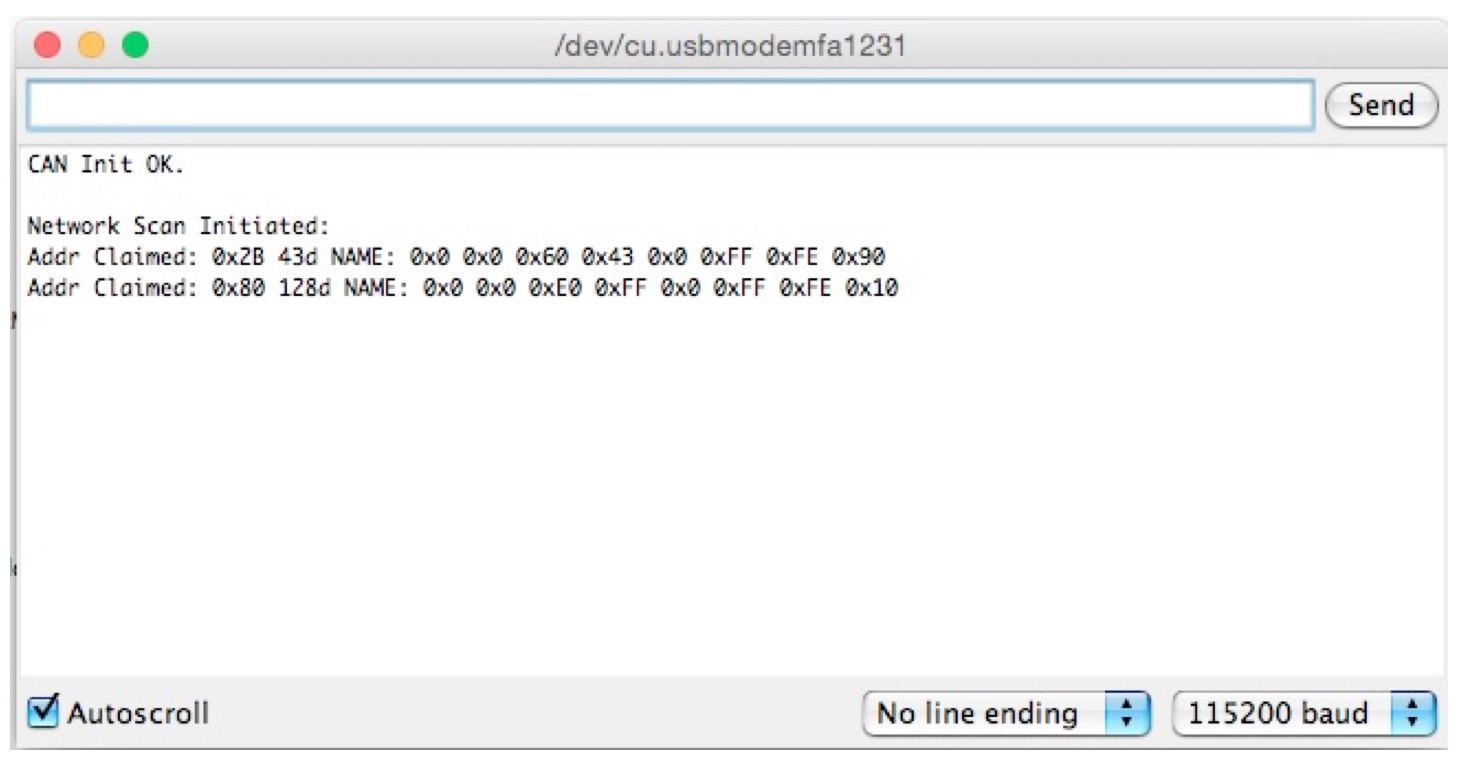 As I mentioned previously, in order to accomplish basic gateway functionality with the Arduino, we will need to establish a communications protocol between the Arduino’s USB interface and the PC. The foundation of this USB protocol is already established through the Serial.print function and the protocol will be based on transmitting ASCII text.

In addition, we need to specify the commands to send out J1939 data according to user input. As described before, we use the letter “s” to initiate a network scan.

For the sending of a full SAE J1939 data frame, I have defined the following user input format based on text (ASCII) input:

All parameters will be separated by a space character, and the assumption is that all parameters are entered in hex format.

Per the previous example (Request for Address Claimed message), we are sending PGN 0xEAFF with a priority of 6, a source address of 0x33, the global destination address (255), and three data bytes.

Note: The following code accomplishes only a very rudimentary user input verification. Please feel free to refine the code or add more functionality to the protocol. Additional features could be, for instance, the adding/deleting of PGN filters (allowing only user-defined PGNs).

The code as shown is an extension to the previous code excerpt: 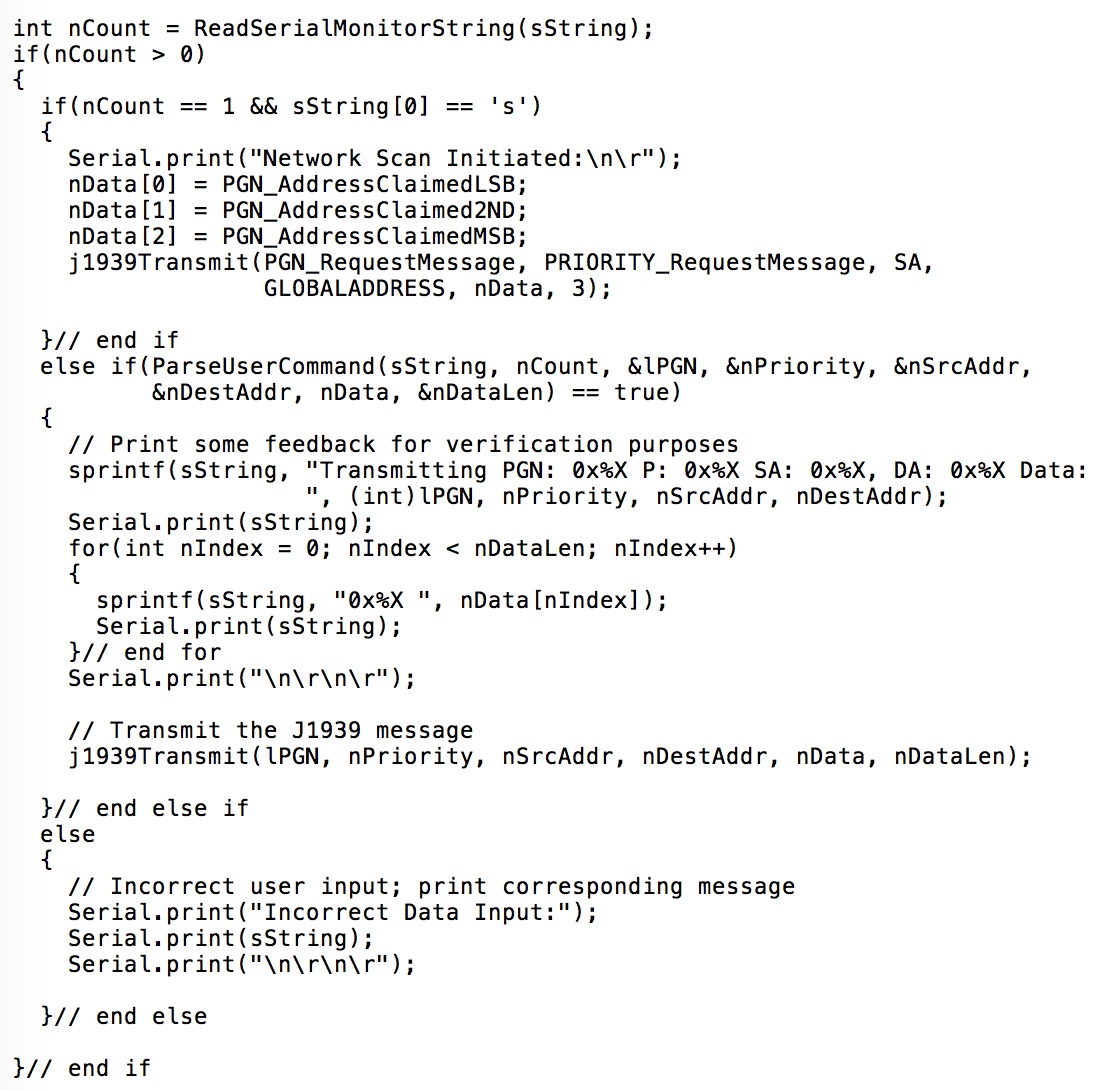 You may notice a new function called ParseUserCommand, which analyzes the user input and returns the result (true = correct, false = incorrect). When the input was found correct, the function returns the PGN, Priority, Source Address (SA), Destination Address (DA), and the actual data.

As a feedback and reference to the user, the J1939 message is printed on the serial monitor and then being transmitted into the J1939 network.

The following screen shot shows the serial monitor, and, as a proof of concept, I had entered two messages. 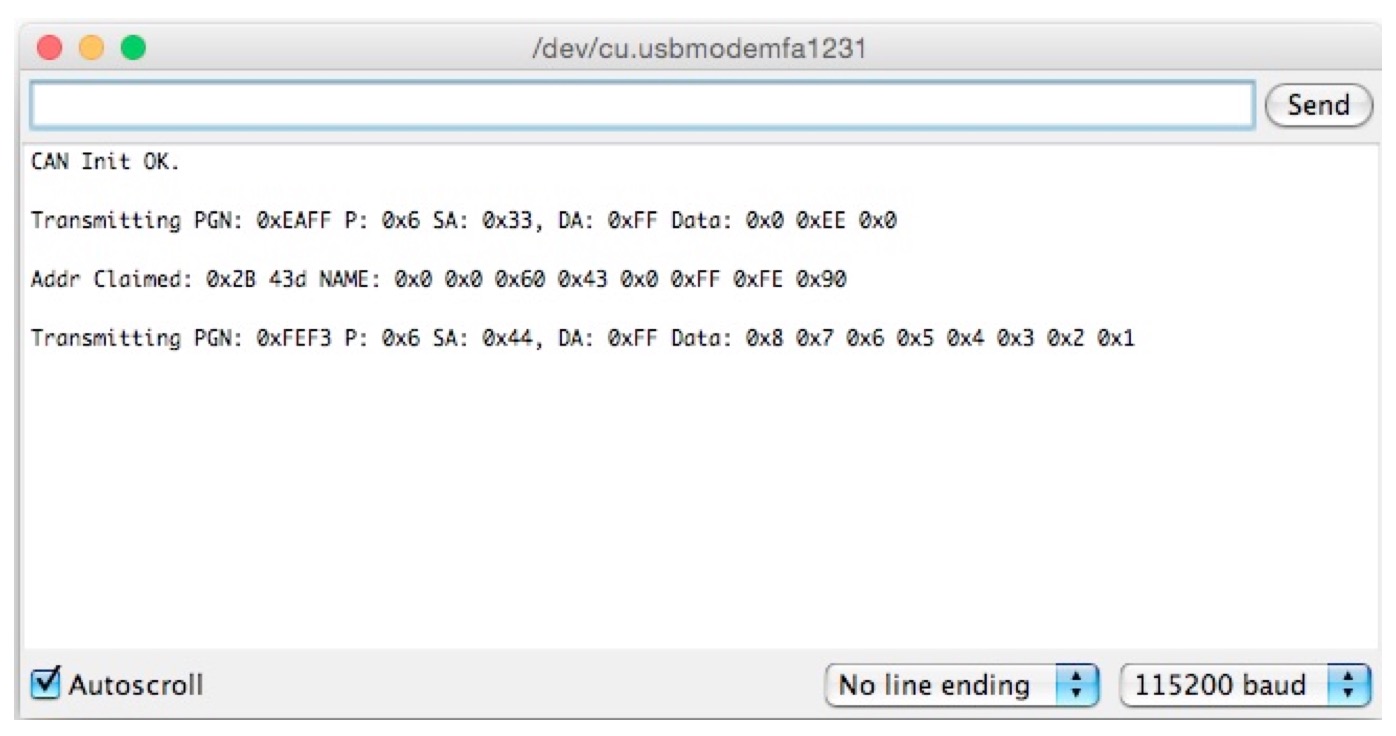 The first message is the Request for Address Claimed message, and therefore the serial monitor shows the reaction from the network (Node address 0x2B). The second message is the Vehicle Position message (PGN 65267 = 0xFEF3), which we had used in a previous example (See chapter SAE J1939 Simulation Example).

The following screen shot from the ADFweb CAN Bus analyzer software confirms the functionality:

As I mentioned before, while this project is only a simple example, there are numerous possibilities to extend the code to a professional SAE J1939 solution. However, one important part of an SAE J1939 to USB gateway is the visualization of received and transmitted data. The following code will give you the basis for accomplishing a professional graphical user interface under Windows.

This post is part of a series about SAE J1939 ECU Programming & Vehicle Bus Simulation with Arduino. In the following Arduino sketch, “data traffic monitoring” means nothing else but receiving and displaying SAE J1939 data messages (Refer also to chapter Receiving J1939 Message Frames). Rather than creating a new project, we will only need to add a few code lines [...]

This post is part of a series about SAE J1939 ECU Programming & Vehicle Bus Simulation with Arduino. Just like the previous project (See chapter Receiving and Responding to J1939 Request Frames) we will be using the SAE J1939 Request Message, in this case to inquire node addresses from the vehicle network. The Request Message (a.k.a. the Request for Address Claimed [...]

This post is part of a series about SAE J1939 ECU Programming & Vehicle Bus Simulation with Arduino. This Arduino project provided a bit of a challenge after I had forgotten my own advice.Note: In order to test a CAN/J1939 application, you need at least two CAN/J1939 nodes to establish a network communication. The second node can be another Arduino [...]

This post is part of a series about SAE J1939 ECU Programming & Vehicle Bus Simulation with Arduino. As I wrote before, both versions of the Arduino used in this book, the Uno and the Mega 2560, are well suitable for SAE J1939 monitoring and simulation projects. Until now, the simulation of SAE J1939 data traffic involved the purchase of expensive [...]

This post is part of a series about SAE J1939 ECU Programming & Vehicle Bus Simulation with Arduino. The implementation of either one of the introduced CAN Bus Shields and the corresponding CAN Bus sketches went surprisingly smooth when paired with the right library software. Note: All Arduino CAN Bus/SAE J1939 sketches as explained in the following include the [...]

CAN Bus Prototyping With Arduino Uno - Arduino CAN Sketches

This post is part of a series about Controller Area Network (CAN Bus) Prototyping With the Arduino Uno.The implementation of either one of the introduced CAN Bus Shields and the corresponding CAN Bus sketches went surprisingly smooth when paired with the right library software. I found several source codes for accessing the MCP2515 CAN controller, but most of [...]

Arduino Technical Reference And Handbook For Technicians, Engineers, And Makers

Rather than yet another project-based workbook, Arduino: A Technical Reference is a reference and handbook that thoroughly describes the electrical and performance aspects of an Arduino board and its software. This book brings together in one place all the information you need to get something done with Arduino. It will save you from endless web searches [...]

Arduino: A Technical Reference: A Handbook for Technicians, Engineers, and Makers Rather than yet another project-based workbook, Arduino: A Technical Reference is a reference and handbook that thoroughly describes the electrical and performance aspects of an Arduino board and its software. This book brings together in one place all the information you need to get something done [...]

Arduino For Dummies: Work Through Sketches Line By Line In Plain English

Arduino is an open-source computer hardware and software company, project and user community that designs and manufactures microcontroller-based kits for building digital devices and interactive objects that can sense and control objects in the physical world.This is no ordinary circuit board. Arduino allows anyone, whether you're an artist, designer, programmer or hobbyist, to learn about [...]