The JCOM.J1939.USB-B board supports the full SAE J1939 protocol according to J1939/81 Network Management (Address Claiming) and J1939/21 Transport Protocol (TP). It also supports a serial protocol (per USB) to maintain communication with a host system, usually a PC. This protocol is being extended on occasion, either due to customer request or to add new features we deem beneficial for our customers.

In order to update the firmware, please follow the steps as described here:

In the jCOM1939 Monitor software, select the “Gateway” tab. Please make sure, the communication with the gateway was initiated by clicking “Start COM” command button, otherwise the gateway will not report the firmware version.

In the upper right position of the tab, check the Software Version number and verify it with the newest version as documented as shown above on this page.

In order to update the internal program (i.e. the firmware), we provide a .hex file that can be loaded into the device either directly per USB port (see the following steps).

Important! Activating the Flash Programming Mode per jCOM1939 Monitor software will only work with firmware versions 1.10.00 and higher! If your firmware is lower than 1.10.00, please use the ISP/RST jumper method as described in the following chapter.

Coming back to the same section of the JCOM1939 Monitor software: First, please assure that the device is not connected to a running CAN/J1939 network.

Click on the “FLASH” command button. The program will prompt you to confirm the action, and if you click “Yes” the following will happen:

The software (FlashMagic) required to load the firmware is a free download at:

Flash Magic is a PC tool for programming flash based micro-controllers from NXP using a serial or Ethernet protocol while in the target hardware. 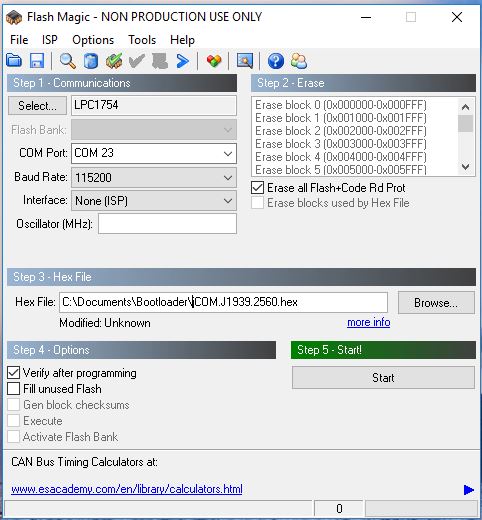 The above image shows the settings you need to apply. The only difference in your setup would be the choice of COM Port and the location and name of the .hex file.

After the flash programming process has finished, close FlashMagic, then reset the jCOM gateway, either by shortly jumpering RST or initiating a power-cycle (removing, then re-connecting the USB cable). Shortly after reset, you should see LED2 blinking with a one-second frequency.