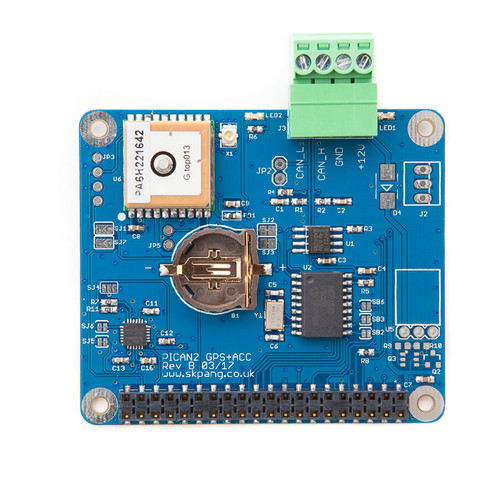 PiCAN with GPS - Gyro - Accelerometer CAN-Bus Board for Raspberry Pi

Sorry, this product is discontinued. Replacement will be available by August 2022.

The PiCAN GPS board provides CAN-Bus and GPS capability for the Raspberry Pi. It uses the Microchip MCP2515 CAN controller. CAN connections are made via 4 way screw terminal plugs. The GPS is provided by a 66-channels MTK3339 chipset module. An onboard battery holder exists for a CR1225 cell. The backup power is for the real time clock and helps reduce startup times. The GPS module has a built-in patch antenna but an external active antenna can also be used via uFL connector.

The MPU-6050 provides six axis gyro and accelerometer with an onboard Digital Motion Processor (DMPTM) capable of processing complex 9-axis MotionFusion algorithms. It does away with the cross-axis alignment problems that can creep up on discrete parts.
Easy to install SocketCAN driver. Programming can be done in C or Python.

The GPS sensor provides data according to NMEA 0183 (as does any standard GPS sensor), and decoding the data is fairly easy to accomplish with the following information, the so-called NMEA output sentences, at hand. 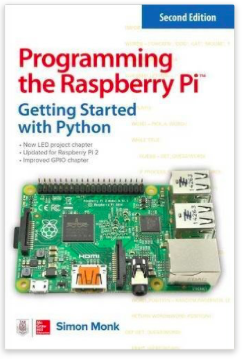 Programming the Raspberry Pi - Getting Started with Python

Learn to create inventive programs and fun games on your powerful Raspberry Pi―with no programming experience required. This practical book has been revised to fully cover the new Raspberry Pi 2, including upgrades to the Raspbian operating system. Discover how to configure hardware and software, write Python scripts, create user-friendly GUIs, and control external electronics. DIY projects include a hangman game, RGB LED controller, digital clock, and RasPiRobot complete with an ultrasonic rangefinder.