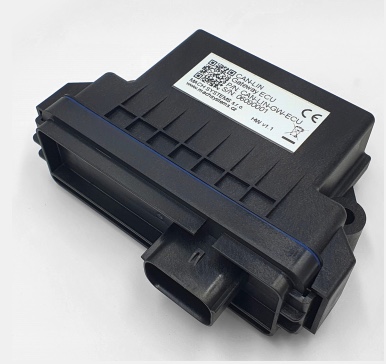 The control unit is completely configurable and can operate as a stand-alone data converter between a CAN/CAN FD and a LIN bus network or remote I/O modules to connect vehicle sensors and actuators to CAN and LIN systems. The control unit supports both SAE J1939 and raw CAN protocols, and it adequately fits mobile and stationary applications in harsh automotive and industrial environments.

An ECU Configurator PC application supports a useful configuration of the ECU over the CAN bus.

An onboard non-volatile memory stores all setup parameters.

The CAN-LIN Gateway is available in several variants that offer combinations of single-CAN / dual-CAN (CAN FD is supported), with or without CAN termination, and automatic wake-up and sleep based on CAN network activity. 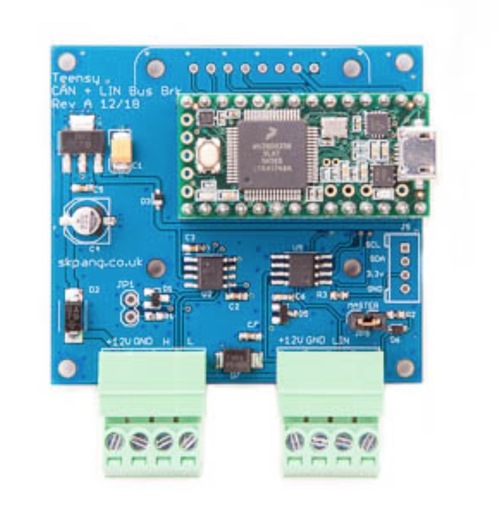 Teensy 3.2 CAN Bus And LIN Bus Breakout Board

This is a CAN Bus breakout board for use with the Teensy 3.2 (included in the scope of delivery). It comes with an onboard 5 VDC regulator with reverse voltage protection, a CAN Bus transceiver, and a prototyping area. The LIN Bus connection is provided by the Microchip MCP2004A chip.

The Teensy is a complete USB-based microcontroller development system, compatible with Arduino software and libraries. It comes in a minimal footprint, capable of implementing a great variety of projects. All programming is accomplished via the onboard USB port.

Classical CAN, CAN FD, And LIN Kit Simulates Devices And Networks For SAE J1939, NMEA 2000, CANopen

Warwick Control Technologies has released a development kit that enables users to simulate Classical CAN, CAN FD, and LIN devices and networks. It also supports the simulation of SAE J1939, NMEA 2000, and CANopen devices and networks. The kit comes with the Kvaser Hybrid Pro two-channel interface to test Classical CAN, CAN FD, and LIN systems through [...]

Lipowski Industrie-Elektronik (Germany), a member of the LIN-Consortium, offers its Baby-LIN-II gateway. The Baby-LIN-II represents a small but powerful system to control a LIN bus via USB and simulate LIN master or LIN slave nodes. The galvanically isolated LIN interface avoids problems in harsh environments.The device also supports stand-alone operation without a PC. A durability [...]

Under Development: Galvanically Isolated Quad Channel CAN Bus to USB Gateway For Industrial And Automotive Applications

A few months ago, we introduced a development concept for an  Automotive Network Development System with CAN, CAN FD, LIN, Ethernet. After further market research plus very much appreciated feedback from customers, we decided to modify the concept and basically create two devices, one for CAN and LIN, the other to CAN and Ethernet. Ethernet, in [...]

Arduino Based CAN Bus, LIN Bus Development And Prototyping Boards For Automotive And Industrial Applications

Teensy is a line of Arduino-compatible boards designed to offer maximum I/O capabilities, backed up by a slew of fully featured software libraries designed to run on Arduino. The Teensy is a complete USB-based microcontroller development system in a minimal footprint, and it is capable of implementing many types of projects. All programming is done [...]

Wuerth Elektronik ICS introduced their Intelligent Control and Command System controllers ICCS 121P CAN and the ICCS 64P V2 CAN, which both come with two CAN Bus and one LIN Bus ports.The ICCS controllers support the full CAN 2.0 Standard with 11‑bit and 29‑bit CAN Bus message identifier lengths and bit rates from 20 kbit/s to 1 Mbit/s with [...]

HMS Networks extended its IXXAT PC-interface portfolio with the introduction of its multi-channel board CAN-IB 640/PCIe, which provides four channels, each for CAN FD/Classical CAN and LIN Bus connectivity.Automotive systems and industrial applications often operate using several Classical CAN and CAN FD networks, connected to additional testing, monitoring, and control systems. The multi-channel CAN-IB 640/PCIe card [...]

The LIN Serial Analyzer development tool enables the user to monitor and communicate to a LIN (Local Interface Network) bus using a Personal Computer (PC). It is a powerful tool that can be used to send messages, monitoring the bus traffic, perform error checks, and filter messages. There are many other features, allowing the user to [...]

We at Copperhill Technologies have plans to create gateways for automotive networking, which includes serial protocols such as Automotive Ethernet, CAN (Controller Area Network), and LIN (Local Interconnect Network). The following focusses on the Ethernet part of the concept, where Ethernet also applies to Internet-of-Things (IoT) and Industrial-Internet-of-Things (IIoT) applications. The basic idea is to build [...]

LIN (Local Interconnect Network) is a serial network protocol used for communication between components in vehicles. The demand for a second serial network emerged as the technologies and the facilities implemented in modern cars grew, while the CAN Bus was too expensive to implement for every component in the car.The Arduino Compatible LIN Bus And CAN [...]