Even though highly influential in automobiles and small applications, the CAN Bus technology alone is not suitable for machine automation since its communication between devices is limited to only 8 bytes.

To explain higher layer protocols, we must refer again to the ISO/OSI Reference Model as shown in the following image.

For more information on the OSI Reference Model refer to: 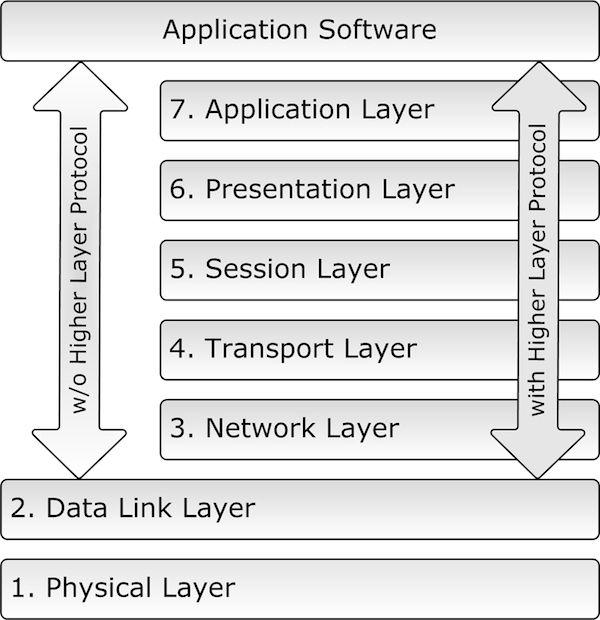 To put it in a nutshell, higher layer protocols are necessary because

To emphasize the point, whenever you attempt to add software functions between the CAN Data Link Layer and the Application Layer, you will be adding functionalities already covered by off-the-shelf available higher layer protocols such as CANopen, DeviceNet, SAE J1939, or NMEA 2000.

NMEA 2000 is a marine networking standard designed and managed by the National Marine Electronics Association (NMEA). The NMEA is an association of marine electronics manufacturers, dealers, and technicians. NMEA 2000 is a derivative of SAE J1939, i.e., its functionality is identical to SAE J1939 but has some added features and it uses different data definitions (PGNs).

At first glance, a comparison of the two networking technologies, Controller Area Network (CAN Bus) and Industrial Ethernet may appear as a battle between David and Goliath. On one side, you have the clear underdog, CAN Bus with its 1 Mbit/sec baud rate, its limited network length, and a maximum data length of 8 bytes per message. [...]

Renesas announced their RX72M networking solutions, which reduce the development efforts while using the RX72M for slave equipment for industrial networks; they are available for motor drives at robot terminals, small programmable logic controllers (PLCs) and remote I/O, and more.The RX72M solution comprises of an evaluation board with operating system, middleware, and sample software supporting around [...]

The following is an excerpt from A Comprehensible Guide To J1939 by Wilfried Voss. Even though extremely effective in automobiles and small applications, CAN alone is not suitable for machine automation, since its communication between devices is limited to only 8 bytes per message. As a consequence, higher layer protocols such as CANopen for machine control, DeviceNet for factory automation and [...]