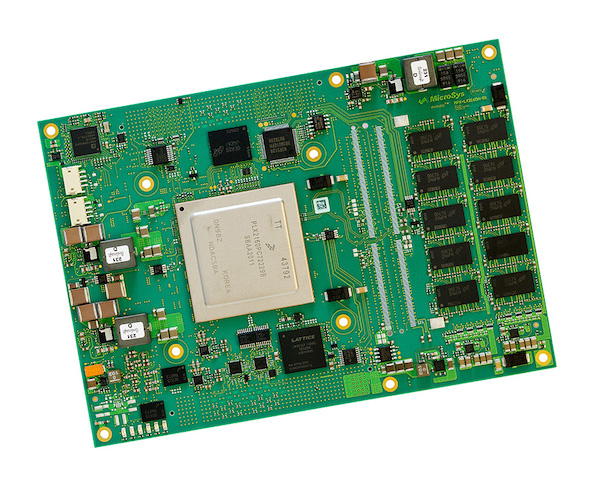 The module is based on the NXP LX2160A processor and offers 16 Arm Cortex-A72 cores, which are twice as many as its predecessors. The configuration meets the requirements of (artificial intelligence) edge server applications, autonomous driving, and situational awareness in cobot applications. Typical use cases are for V2X (Vehicle-to-Any) communications, e.g., edge servers in trains, planes, commercial vehicles, autonomous mobile systems, and functional safety applications.

The peripherals include two CAN FD ports, 100-Gbit/s Ethernet, two USB 3.0, SPI, I2C, and various other interfaces. A choice for PCIe 3.0 interfaces is also available. The overall processing performance is supported by a 50-Gbit/s security engine and a 100-Gbit/s compression/decompression engine. The operating temperature from -40 °C to + 85 °C and a power supply of 5 VDC to 12 VDC is possible.

The board support package includes the bootloader configuration and the required Linux drivers. The module is available as an off-the-shelf component or a development kit with a carrier board plus cable set.

After NXP announced their S32G vehicle network processor at this year’s CES show, Microsys created the Miriac MPX-S32G274A SOMs and development kits based on this central processing unit family. The system combines interfaces for the CAN Bus (18 CAN Bus and two CAN FD ports), Flexray, LIN, and Ethernet interfaces for automotive networking. 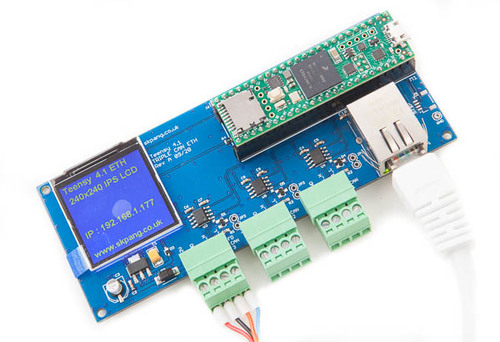 The board represents a Teensy 4.1 board with triple CAN Bus connections, two CAN 2.0B and one CAN FD and ethernet magjack. Power is applied per an external +12 VDC with reverse voltage protection. Included is also a 240x240 wide-angle IPS TFT LCD.

The Teensy 4.1 is an Arduino-compatible board with an Arm Cortex-M7 microcontroller running at 600 MHz. The board is compatible with the Arduino IDE and the Arduino library. In most cases, code written for another Arduino board works with minimal changes on the Teensy board. As the name implies, the board is tiny. For example, the current form factor is only about 18 by 36 millimeters. However, do not let the size mislead you; these boards pack a ton of functionality. For example, the new Teensy 4.1 features a megabyte of RAM, two megabytes of Flash, a bevy of I/O options, cryptographic support, a hardware floating-point processor (FPU), and a built-in real-time clock (RTC).

The CANFD LIN Gateway by MACH SYSTEMS is an easy-to-use, easy-to-program router, data logger, and simulator that features two CAN FD channels, a LIN channel, an RS-232 port, a microSD card slot, and multiple digital and analog inputs and outputs. The firmware can be developed using C/C++ in a free-of-charge IDE, and the user can load the application [...]

Windows-Based Analysis And Test Environment For CAN -FD, LIN And Automotive Ethernet

CanEasy by Schleissheimer (Germany) is a Windows-based analysis and test system for CAN-FD, LIN and Automotive Ethernet. The tool simulates serial bus traffic, it provides a high degree of automation and is easily configured and extended with the support of plug-in modules. The goal is that users should focus on their task and not on their tools. CanEasy is a [...]

LIN (Local Interconnect Network) is a serial network protocol used for communication between components in vehicles. The demand for a second serial network emerged as the technologies and the facilities implemented in modern cars grew, while the CAN Bus was too expensive to implement for every component in the car. European car manufacturers started using [...]

Versatile PC Diagnostics Interface With CAN Bus, CAN FD, And LIN Ports

The VCI-Muxdiag-3 by Exxotest (France) is a versatile PC interface. It is particularly suitable for communication analysis and diagnostics applications on multi-bus vehicle architectures. The product is compatible with the following communication channels: Classical CAN Bus, CAN FD, LIN, and more. The dimensions of 131 mm x 65 mm x 25 mm make it possible to transport the product for [...]

Kvaser's Hybrid 2xCAN/LIN is a flexible, dual channel interface where each channel can be configured independently, either as CAN Bus or LIN (Local Interconnect Network). With a standard USB connector and two high-speed CAN or LIN channels in two separate 9-pin D-SUB CAN connectors, this is a high-performance, yet compact ’universal interface’ that every engineer involved in automotive [...]