For a brief introduction to PGNs, see our post SAE J1939 Message Format and Interpretations of PGNs.

As the name Proprietary Parameter Group Numbers implies, the SAE J1939 standard supports Parameter Groups in PDU1 and PDU2 Format that manufacturers can assign for their specific needs, which includes the design of the data field in the message. The only constraint is that, per SAE request, “excessive” utilization of the network (e.g., 2 percent or more) should be avoided. This requirement is, however, not based on any technical restrictions by the CAN/J1939 network. 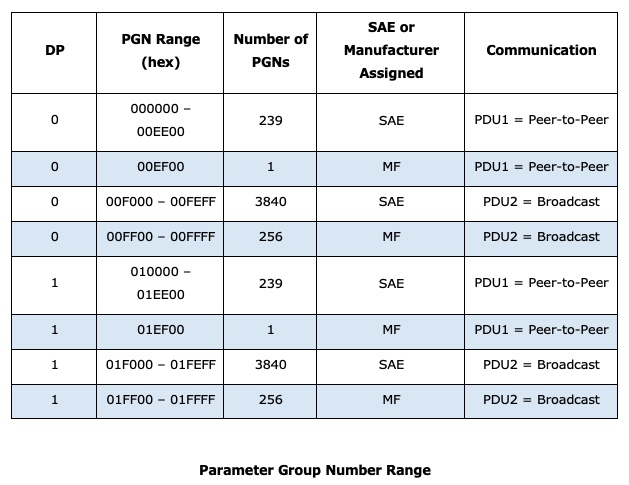 The potential problem comes with the possibility that two or more manufacturers may use the same Proprietary Parameter Group Number. SAE J1939/21 recommends that receivers of such messages need to differentiate between manufacturers, which can be accomplished by checking the Manufacturer Code in the ECU’s NAME.

Our JCOM.J1939 Starter Kit And Network Simulator is designed to allow the experienced engineer as well as the beginner to experiment with SAE J1939 data communication without the need of connecting to a real-world SAE J1939 network, i.e. a diesel engine.

For that reason, our JCOM.J1939 Starter Kit And Network Simulator consists of two SAE J1939 nodes, namely our JCOM.J1939.USB, an SAE J1939 ECU Simulator Board With USB Port. The board supports the full SAE J1939 protocol according to J1939/81 Network Management (Address Claiming) and J1939/21 Transport Protocol (TP).