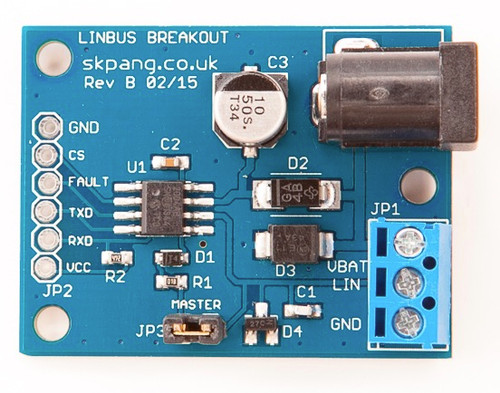 This is a LIN Bus breakout board with a Microchip MCP2004A transceiver.

The connection between the LIN bus breakout board and an embedded system (such as the Arduino) is a simple standard UART connection, i.e., you connect the Arduino TX pin to the board’s RX and the Arduino RX to the board’s TX. The RX/TX pins are different on the Uno than on the Mega, Due, or other boards. Consequently, it would be best to look at the Uno/Mega board (or schematics) to find these pins. Please understand that the board is designed to work with any embedded system, not just the Arduino boards, and we can't cover them all. Also, please be aware that the Uno has only one RX/TX set, while, for instance, the Due has four. 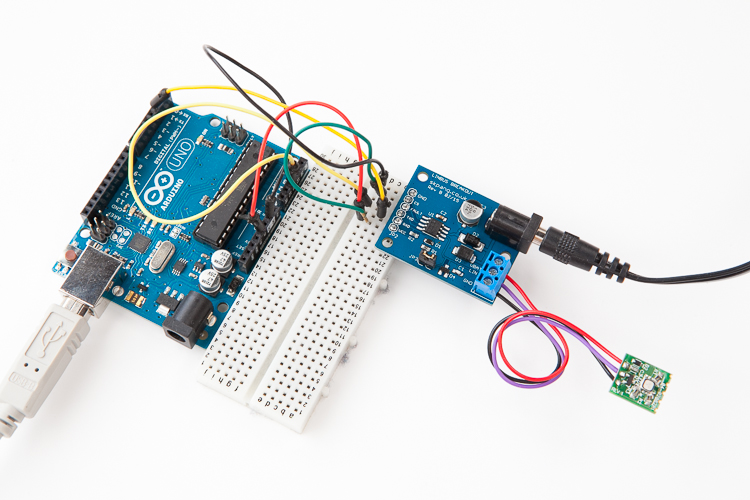 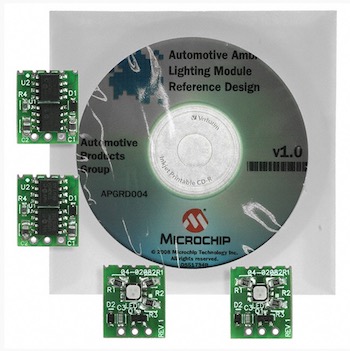 The above LIN Slave module used for this particular test configuration is a Microchip APGRD004. The APGRD004 is a automotive ambient interior lighting module reference design demonstrates microcontroller based control of RGB LED devices. This module can be controlled remotely by a master body controller via a LIN bus. These modules are offered in a very compact form factor board and comprise of a PIC12F615 MCU, an MCP2021 LIN transceiver/voltage regulator, and RGB LED. LIN commands are interpreted by the module to control color mixing (16,383 colors) and intensity (1023 levels). The kit ships with four modules to assign as lighting zones in a LIN or J2602 network. These modules can also be used in conjunction with the APGDT001 LIN Serial analyzer to quickly create a working LIN network straight out of the box. 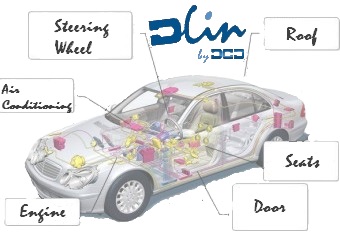 LIN (Local Interconnect Network) is a serial network protocol used for communication between components in vehicles. The need for a cheap serial network arose as the technologies and the facilities implemented in the car grew, while the CAN bus was too expensive to implement for every component in the car. European car manufacturers started using different serial communication topologies, which led to compatibility problems.

In the late 1990s, the LIN Consortium was founded by five automakers (BMW, Volkswagen Group, Audi Group, Volvo Cars, Mercedes-Benz), with the technologies supplied (networking and hardware expertise) from Volcano Automotive Group and Motorola. The first fully implemented version of the new LIN specification (LIN version 1.3) was published in November 2002. In September 2003, version 2.0 was introduced to expand capabilities and make provisions for additional diagnostics features. LIN may be used also over the vehicle's battery power-line with a special DC-LIN transceiver. (Source: Wikipedia.org) 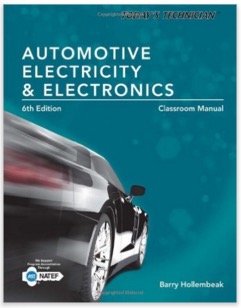 Known for its comprehensive coverage, accurate and up-to-date technical information, and hundreds of detailed illustrations and vibrant photographs, the text is an ideal resource to prepare for success as an automotive technician or pursue ASE certification. Now updated with extensive information on new and emerging technology and techniques--including audio and infotainment systems, LED and adaptive lighting, hybrid and electric vehicles, and accessory systems--the Sixth Edition also aligns with the NATEF 2012 accreditation model, including job sheets correlated to specific AST and MAST tasks.