According to  SAE J1939/81, network management procedures are used to “collectively manage the network”.

While other higher layer protocols based on CAN Bus do not support dynamic node address assignments per default, the SAE J1939 standard provides yet another ingeniously designed feature to uniquely identify ECUs and their primary function.

The CAN standard in itself does not support node (ECU) addresses, only message IDs, where one node may manage multiple messages. However, the message ID must be hard-coded in the application program.

The SAE J1939 network management messages have the same characteristics as all other J1939 messages. These messages are:

The Request for Address Claimed message (PGN 59904) is identical to the Request message type as described in SAE J1939/21 and chapter Parameter Group Numbers in this book.

The purpose of sending such a request may be for several reasons, for instance:

The response to a Request for Address Claimed message can be multiple: 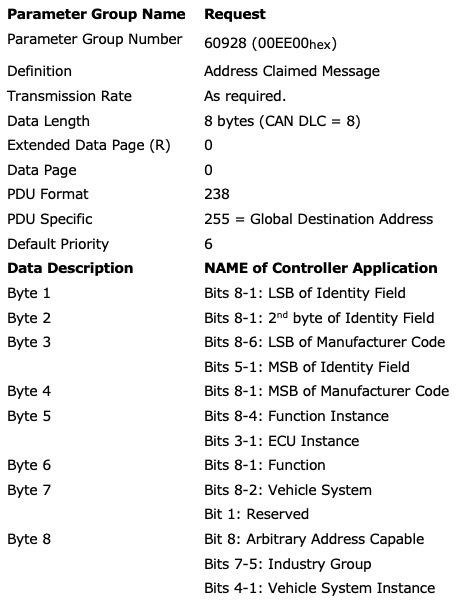 The Cannot Claim Address message has the same format as the Address Claimed message, but it uses the NULL address (254) as the source address.

The following rules apply for the Cannot Claim Address message:

Note: SAE J1939/81 is concerned that the occurrence of such an error condition will consume “a large number of bit times on the bus”. However, the time for transmitting a CAN Bus message with a 29-Bit ID followed by an error frame will be well under 1 ms.