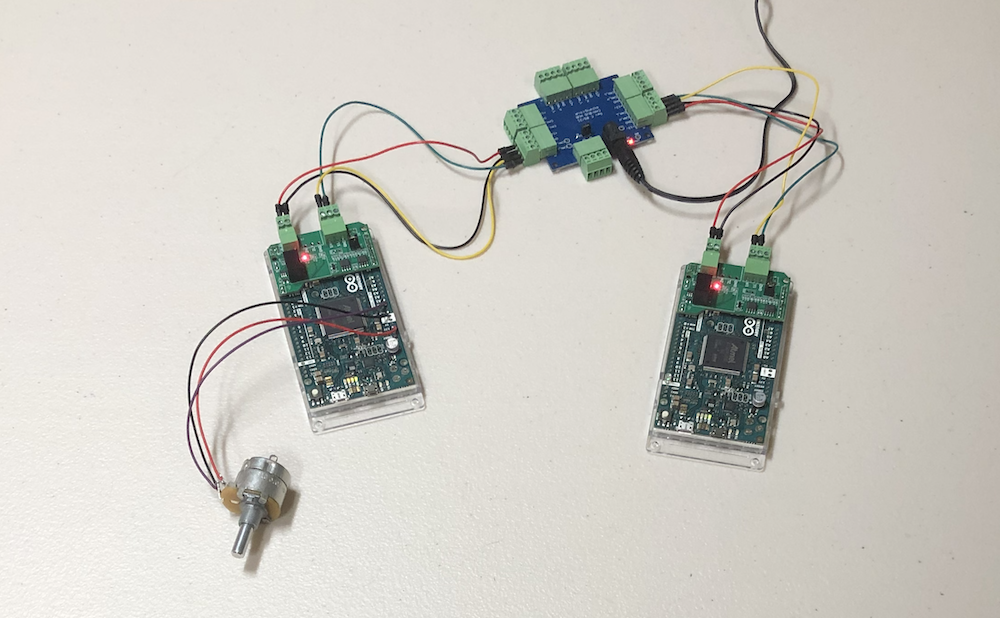 This post is part of our series on Utilizing SAE J1939 as a Higher-Layer Protocol for Industrial Automation.

In short, the application I had in mind was to read an analog signal per one SAE J1939 node and transmit the data to another J1939 node where it controls the blinking frequency of an LED. 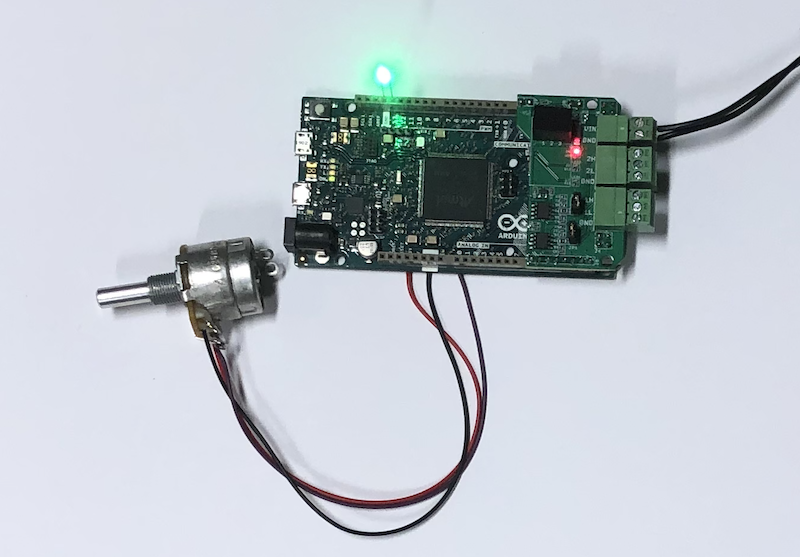 This project is based on an Analog Input example on the Arduino.cc website. In this example, an Arduino Uno board reads the analog input from a variable resistor, i.e., a potentiometer. The analog value determines the blink rate of an onboard LED.

It was fairly easy to replicate the application for the Arduino Due. The only difference is that the analog input supports only 3.3 VDC instead of the 5 VDC for the Arduino Uno.

For our project, however, I am using two Arduino Due, i.e., a downsized version of our  ECU Development Board With Dual CAN Bus Interface as shown in above image. These boards support only one CAN Bus port. One board reads the voltage from a connected potentiometer, the other controls a single LED.

In addition, I am using our CAN-Bus Hub with 7 Ports and DC Power Connection for the purpose of creating a neat setup but also considering adding more nodes in the future. The hub also provides the 12 VDC power for all nodes in the network.

In our next application, we will use a Raspberry Pi as a central control unit, and the hub allows for an easy hardware connection. Furthermore, we will demonstrate an easy SAE J1939 implementation for the Raspberry Pi.

We at Copperhill Technologies have developed an SAE J1939 protocol stack for the Arduino line of CPU boards, which supports the Arduino Uno and Mega 2560. In addition, we have a specialized version for the Arduino Due that can be downloaded here.

I had contemplated releasing ARD1939 in form of the original source code but ultimately decided against it, mostly out of respect for those small businesses that make a living from selling SAE J1939 devices and software tools. Instead, I provide a pre-compiled code.

The Arduino Sketch I use for the current application includes the full pre-compiled source code. 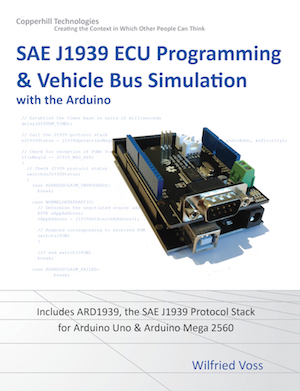 All technical information about ARD1939, the SAE J1939 protocol stack for Arduino, plus detailed description of implementation and available function calls is included in my book SAE J1939 ECU Programming & Vehicle Bus Simulation with Arduino.

Arduino sketches (software projects) include a J1939 network scanner, and a simple SAE J1939 to USB Gateway application with associated Windows GUI (Visual Studio C# project). The collection of sketches is concluded by the ARD1939 project, a fully functional SAE J1939 protocol stack for the Arduino Uno and Mega 2560.

And while the book refers to the UNO and Mega 2560, the description of the SAE J1939 protocol stack applies also to the Arduino Due.

I will not lose too many words on the hardware setup, since it's already documented in the above referenced Analog Input example.

The potentiometer is powered with the onboard 3.3 VDC, and the output is connected to A0. Just as demonstrated in the example, the LED is controlled by digital output 13. Again, contrary to the Arduino example, both components, potentiometer and LED, are connected to their own dedicated Due board.

I have combined both applications, reading the analog signal and controlling the LED, into one sketch, where one #define determines the functionality:

The Analog Read node transmits the analog data every 100 milli-seconds. The LED Control node will update the LED blink rate as soon as it receives the data from the other node.

The Analog Read node uses an ID of 128, while the LED node uses 129. Both nodes will transmit an Address Claim message at startup, but since both are using different addresses, there will be no address negotiation. For safety reasons, both nodes also have different NAMEs.

To repeat the point, the functionality is described in detail in the above referenced book but also at the  ARD1939 download page.

However, for a quick reference, there are two important section in the sketch:

Naturally, there are more details but I don't want to repeat what is already documented sufficiently.

The application works virtually identical to the one described on the Arduino website. It demonstrates effectively that the SAE J1939 protocol can be used for industrial applications for small embedded systems. However, as I mentioned previously, for further proof, I will add more nodes while increasing busload.

Last, but not least, this project example was produced as a courtesy for those who are interested in SAE J1939 programming. In case the above example does not work in your setup, please read the following post as it solves most technical problems:  A Beginner's Guide to SAE J1939 Embedded Software Development. 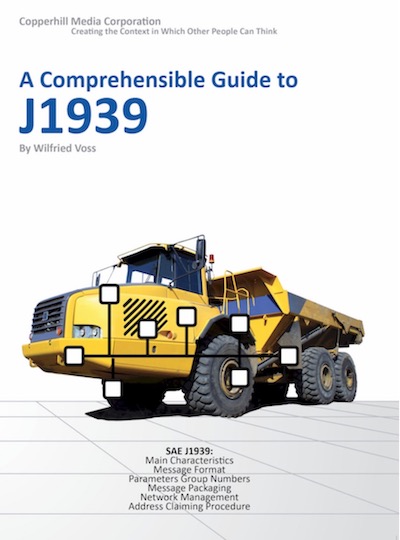