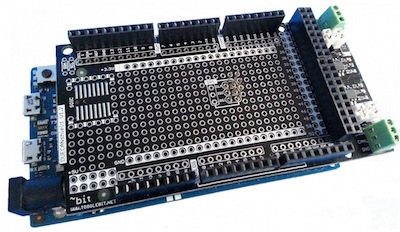 The  Arduino Due is the first ARM-based Arduino development board. The programming of the microcontroller is accomplished through the familiar Arduino IDE (Windows, Mac), keeping the programming as backward compatible to other Arduino systems as possible, thus allowing a smooth migration between processor systems.

For instance, the serial interfaces such as Controller Area Network (CAN) and UART (RS-232/422/485) provide only TTL levels, and you will need additional hardware (transceivers) to make them hardware-compliant with their respective standards. For more detailed information, see my post  ARM Cortex M3 Development Boards Require External CAN Bus Transceiver.

The software situation turned out to be worse than that of the hardware. Yes, there are several options available that help you program CAN applications for the Arduino Due, but pretty much all of them ignore some quality standards that are important to me, with readability and user-friendliness claiming the top spots. Unfortunately, the vast majority of available source code packages do not meet either criteria. To make things worse, the programs, merely developed under the aspect of proving the concept, come with numerous bugs and inconsistencies.

The best package I found was the  due_can package by Collin Kidder as published on GitHub. I used his source code for a quick head start, but also modified it slightly and added a "wrapper" around it, i.e. I created more user-friendly CAN Bus access functions.

The canTx function transmits a CAN data frame through the specified CAN port (cPort = 0/1). Further parameters are the message ID, indicator for extended format (false = 11-bit ID, true = 29-bit ID), the actual data, and the number of data bytes.

The canRx function checks for a received CAN data frame at the specified CAN port (cPort = 0/1).

And yes, this is pretty much it. Naturally, there may be a need for further functionality, such as message filtering, but for a quick head start, these functions will serve the majority of CAN Bus applications with the Arduino Due.