The Arduino code is quite simple and virtually self-explanatory. However, let me lose a few words on the program’s structure.

First of all, depending on the CAN Bus shield used for this programming sample, please make sure you set the proper CS (Chip Select) for the CAN Bus controller as described in module can.cpp (See also my remarks in the chapter about the CAN-BUS Shield by Seeed Studio).

In the main program module J1939_Data_Traffic_simulation I defined two messages, msgVehiclePosition and msgAmbientConditons, and filled them with random data.

In the main loop I use the delay function to create a one-second timer by means of the variable nCounter. The content of nCounter triggers the transmission of the corresponding messages. 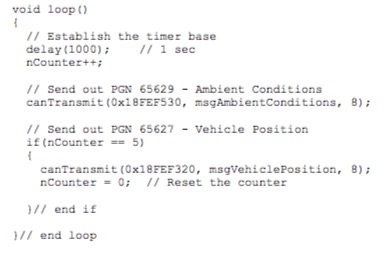 The Arduino Project Handbook is a beginner-friendly collection of electronics projects using the low-cost Arduino board. With only a handful of components, an Arduino, and a computer, you will learn to build and program everything from light shows to arcade games to an ultrasonic security system.First, you will get set up with an introduction to the Arduino [...]

This post is part of a series about Controller Area Network (CAN Bus) Prototyping With the Arduino Uno.In this next, extended example, we use the same program as shown in the previous chapter but add a CAN receiving routine to it. The result, i.e. the received messages, will be displayed through the Arduino serial monitor.// Simple CAN Shield Test#include [...]

This post is part of a series about Controller Area Network (CAN Bus) Prototyping With the Arduino Uno.The most exciting part about this project is when it comes to the point where two CAN nodes communicate with each other. I started off with writing a simple program that sent messages that were received by my USB-to-CAN gateway and its [...]