The  Society of Automotive Engineers (SAE) Truck and Bus Control and Communications Subcommittee has developed a family of standards concerning the design and use of devices that transmit electronic signals and control information among vehicle components. SAE J1939 and its companion documents have quickly become the accepted industry standard and the vehicle network of choice for off-highway machines in applications such as construction, material handling, mass transportation, forestry machines, agricultural machinery, maritime and military applications.

SAE J1939 is a higher-layer protocol based on Controller Area Network (CAN). It provides serial data communications between microprocessor systems (also called Electronic Control Units - ECU) in any kind of heavy-duty vehicles. The messages exchanged between these units can be data such as vehicle road speed, torque control message from the transmission to the engine, oil temperature, and many more.

With the emergence of newer CAN Bus technologies, SAE struggles with the migration from Classical CAN to CAN FD, which was introduced in 2013. To worsen matters, another extended protocol is in the works: CAN XL.

Back in 2011, Bosch, the creator of the CAN Bus technology, started the development of CAN FD (Flexible Data Rate), which allows higher transmission rates and extended data frames. It is fair to say that the idea was spawned due to demands by German automakers in view of increased requirements that come with electric and autonomous vehicles. However, CiA (CAN-in-Automation), the gatekeeper of the CAN standard, wrote in reference to BMW: "...the German carmaker was not that enthusiastic when the protocol was introduced in 2013."
(Source:  Classical CAN, CAN FD, and CAN XL)

The struggle for SAE comes with the fact that (against popular belief)  CAN FD is not entirely backward-compatible to Classical CAN. According to the SAE J1939/15 Standard (Physical Layer, 250 Kbps, Un-Shielded Twisted Pair):

CAN controllers are now available which support the newly introduced CAN Flexible Data Rate Frame format (known as “CAN FD”). These controllers, when used on SAE J1939-15 networks, must be restricted to use only the Classical Frame format compliant to ISO 11898-1 (2003).

SAE develops the J1939-22 network and application layer and the related J1939-17 physical layer. SAE J1939-17 specifies 500 kbit/s in the arbitration phase and 2 Mbit/s in the data phase. Both specifications are intended to be released in 2019.

CAN-in-Automation attempted an integration of CAN FD into SAE J1939 (Mapping of J1939 to CAN FD), but the result was a mere description of a CAN Bus bridge that uses CAN FD for faster data transfer outside the J1939 network.

In June of 2019,  CiA announced its intention to launch yet another flavor of the ever-popular CAN Bus technology, namely CAN XL, which supports an extra-large (XL) payload of up to 2048 bytes. CiA stresses the point that CAN XL was "designed to fill the gap between 100-Mbit/s automotive Ethernet," while CAN XL only supports 10 Mbit/s.

Almost needless to say, but the development of CAN XL is primarily driven by German automobile manufacturers. It appears, their view of autonomous vehicles does not include Automotive Ethernet.

In regard to backward-compatibility, according to CiA (a feedback to our tweet): "The CAN XL protocol under development in CiA is backwards-compatible to CAN FD (we learnt our lesson)."

As I wrote in a previous post, by the time CAN XL effectively reaches the market, it will be considered obsolete compared to improved and thus much more powerful Ethernet technologies. In the meantime, I will be waiting for CAN-SCFE (Supercalifragilisticexpialidocious).

That being said, I doubt that CAN XL will have any impact on the SAE J1939 protocol for the years to come. 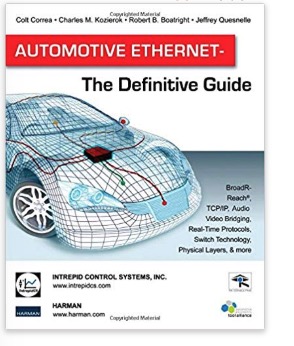 Comparison Of CAN Bus And Ethernet Features For Automotive Networking Applications

Ethernet, the most widely used LAN technology in homes, offices, and factories, is increasingly utilized in the automotive world in the form of Automotive Ethernet. Vehicles now routinely accommodate multiple cameras, on-board diagnostics, advanced driver assistance systems (ADAS), infotainment systems, and in-dash displays. With all the added hardware and software comes a massive demand for [...]

The following is an update on the development (firmware plus supporting Windows monitoring tool) of our newest product, the SAE J1939 Gateway Module With USB Port, RTC, MicroSD Memory Card as shown here to the left.  The JCOM.J939.USB-X SAE J1939 Processor board is an extended version of our popular JCOM.J9139.USB-B SAE J1939 ECU Simulator Board With USB [...]

My book, A Comprehensible Guide to Controller Area Network, was initially published in 2005, and while the technology behind the "Classical" CAN (a tag used by CAN-In-Automation) has not changed, the growing market acceptance of CAN FD (Flexible Data Rate) made me think about working on a second edition. I am aware that CAN FD was [...]

Today, CAN-in-Automation (CiA - not related to the American Homeland Security Department) announced its intention to launch yet another flavor of the ever-popular CAN Bus technology, namely CAN XL, which supports an extra-large (XL) payload of up to 2048 bytes. For more information on CAN XL, we have to wait until after the announcement during the [...]

The following represents an update on our current development activities, in this case the jCOM.J1939 Programmable Data Traffic Simulator (a first prototype is shown in the image to the left).In short, the plan is that the device is being set up by means of a Windows software and then runs the programmed PGNs (Parameter Group [...]