In this following project, we will discover yet another SAE J1939 protocol feature, namely the Request Message (as defined in the SAE J1939/21 standard). As with the previous project, we will need two J1939 nodes, and therefore will need two projects, one to receive the request and response, the second to send the request and receive the response.

But first, let’s have a look at the Request Message: This message type, which is represented by a dedicated PGN, provides the means to request information globally (broadcast) or from a specific node address (peer-to-peer).

Note: The transmission/reception of a 3-byte PGN according to the SAE J1939 standard always confuses programmers that are new to J1939, specifically the sending of LSB first and MSB last, which defies common programmer’s thinking. To make things worse, there is only one small sentence within the massive 1600-page SAE J1939 Standards Collection that refers to that little, nevertheless important detail.

A node receiving the Request Message will respond with the requested PGN and its data.

For our current project we will create the following scenario: Node 0x20 (32) sends out a request for PGN 65262 (0xFFFE – Engine Temperature) to node 0x30 (48). Node 0x30 will receive the request and responds by sending the PGN.

Note: The node numbers and the requested PGN have been randomly chosen and serve only as demonstration examples. In all consequence, the method of requesting messages as shown here is not 100% J1939 compliant. One of the following projects, the J1939 Network Scanner, is a better example for the use of the Request Message.

To re-iterate the tasks at hand:

To simplify the project management, I have combined the two tasks into one project and loaded it onto two separate Arduino systems. In this case both system simulate both node addresses.

The following code, an excerpt from the loop() function, explains the function of this project: 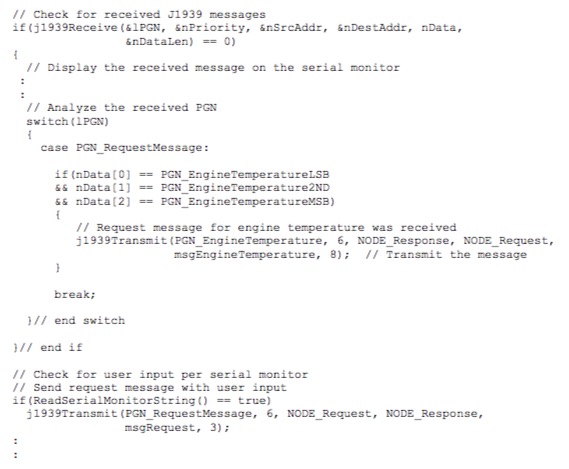 The following image shows the Arduino’s serial monitor after the user has sent a request message. The other Arduino node answered the request. 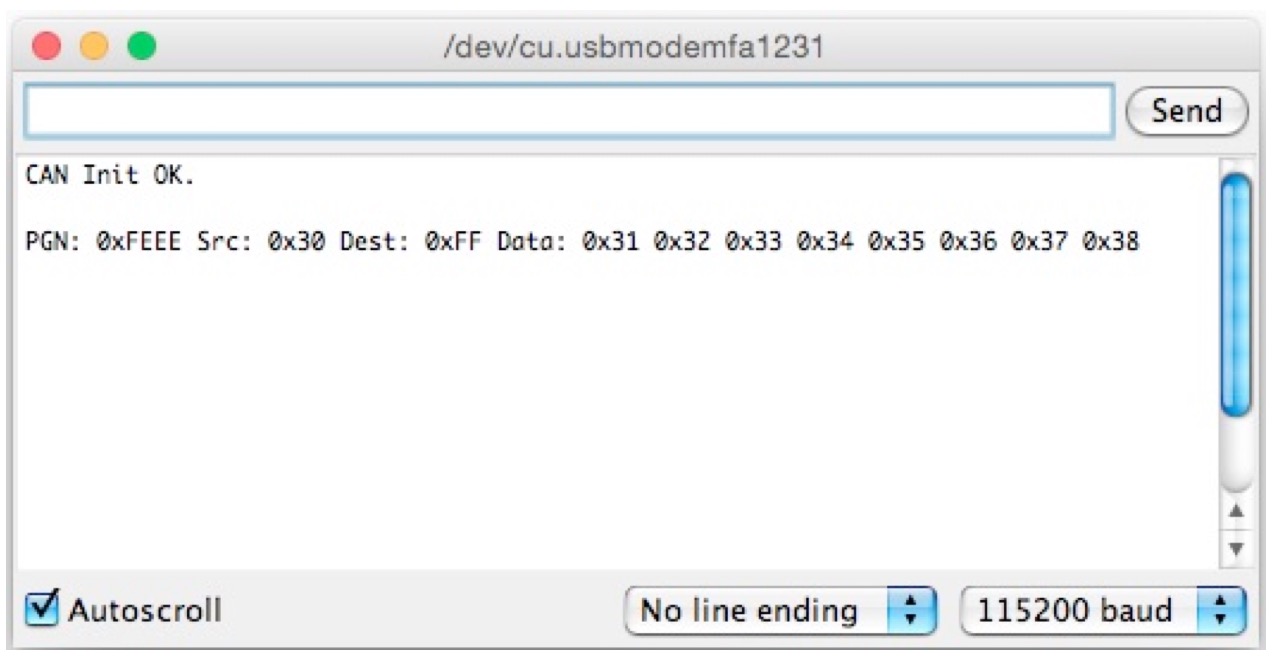 The following screen shot taken through the ADFweb CAN Bus analyzer shows the data traffic on the J1939 vehicle bus, and it confirms the functionality of the project.