In order to test all timeouts during an RTS/CTS session, I used a dedicated Arduino sketch to simulate all the “nasty” features that would trigger a communication breakdown. This method was easier to implement rather than using a full SAE J1939 stack. Fiddling with the protocol stack code to simulate error conditions turned out to be time-consuming and it brought no improvement to the actual code (actually, quite the opposite, since it would blow up the code size).

As with all previous examples, this Arduino sketch (implemented on the Uno) is quite simple, and it leaves you all the possibilities of simulating a defective J1939 node.

First, we need to define the Clear to Send message in the global memory space:

The data is based on the previously described RTS/CTS session (see the DATA section in line 2).

The Arduino sketch, i.e. the loop() function was tailored for this specific RTS/CTS session: 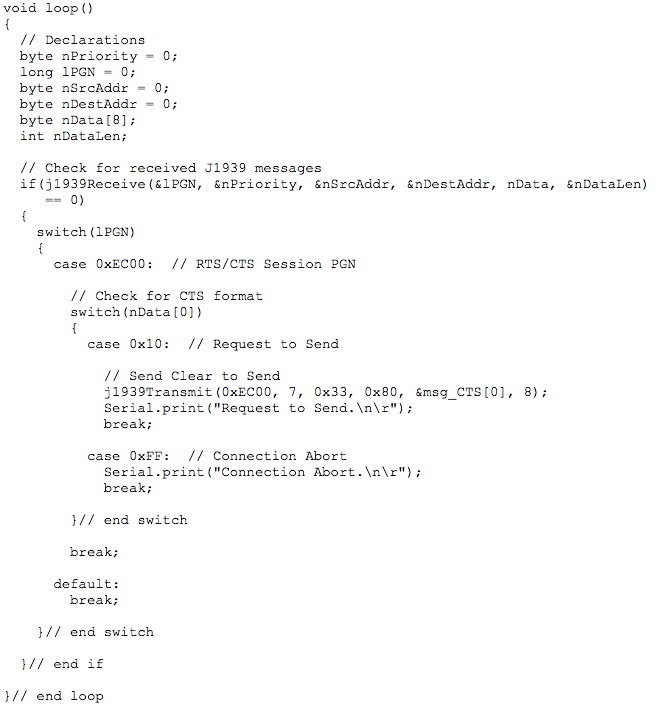 As soon as the j1939Receive(…) function returns a valid data frame, we verify the PGN. If the PGN is the Transport Protocol (TP) PGN, we look at the first byte in the data array to determine if the message is a Request to Send or a Connection Abort message.

If it is a Request to Send, the Arduino transmits the Clear to Send data frame. However, the sketch will not send its End of Message Acknowledgment and that should trigger a Connection Abort message from the Mega 2560.