The typical SAE J1939 ECU application not only involves the protocol stack but also a good amount of input and/or output processing. This could involve reading sensors and sending the result in form of a PGN or reading a PGN and setting an output (digital or analog).

However, since my focus is on the J1939 protocol stack and not on Arduino I/O programming, I will not go into the details of accessing the Arduino’s hardware interfaces. There are a myriad of good books available that more than sufficiently cover this particular topic (see also my recommendation in the appendix for recommended literature).

Nevertheless, I have included a brief sample into the ARD1939 project to process queries for:

First, let’s have a look at these PGNs:

Both messages, software and component identification can contain several (optional) fields as described, which must be separated by an “*” (delimiter). It is not necessary to include all fields, however, the “*” delimiter is always required.

In terms of programming these PGNs into our application, we first need to make up the message’s content (in this case, for demo purposes only) and define the PGNs.

In the global memory space (above setup()) we add the following:

Note: The content of all messages was randomly chosen.

In the setup() routine, we need to define the various message filter, in this case only for the request message (Software ID, Component ID, and vehicle position are not received; they are responses from our J1939 application).

We leave all other settings such as preferred source address, address range, and NAME to their default values (see file ARD1939.h).

It is important to know that there is a specific ARD1939 feature that involves the handling of the Request message:

This behavior is necessary to allow the global address (255), meaning there are scenarios where one ECU requests the information from all nodes in the network.

As a consequence, it is mandatory that the application, in addition to the Request message, also verifies the destination address with its own address.

In the loop() function, we add the code to check for the Request message and the requested PGN as highlighted in the following: 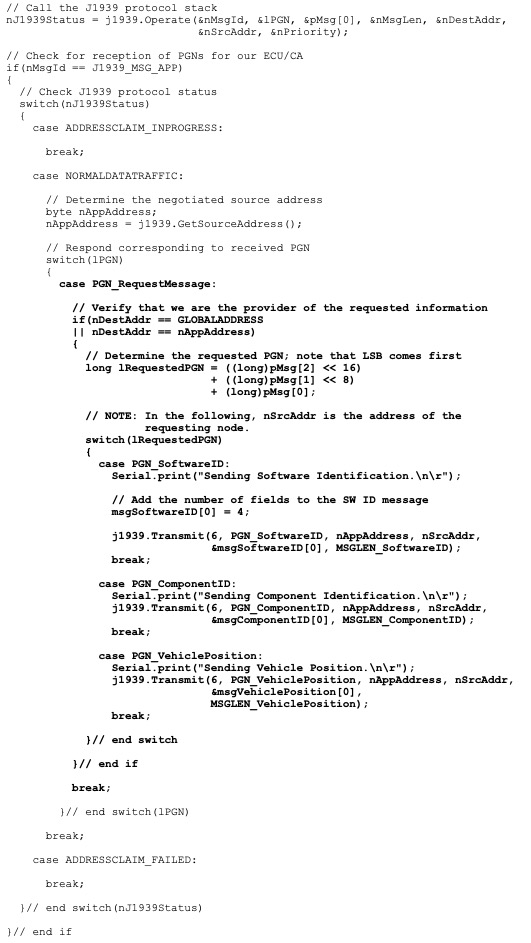 Note: The added code for this J1939 application will work on both Arduino hardware versions, the Uno and the Mega 2560.

In order to test the application, I did not use another Arduino this time but entered the data for the Request message manually into the ADFweb software tool as shown here:

The printout on the Arduino’s serial monitor is as expected:

However, the J1939 data traffic as recorded on the bus came initially as a surprise, but, naturally, then it all made sense.

First of all, lines 8 and 9 bare no surprise. The PGN for Vehicle Position (65267 = 0xFEF3) does not fall into the address range for peer-to-peer communication, thus the message ID contains only the senders address (0x80), i.e. that of the Arduino.

However, in the case of message requests for Software and Component Identification, the ARD1939 reports a timeout through means of the Connection Abort message. Both messages, software and component identification, are longer than eight bytes and thus require the use of the Transportation Protocol (TP), in this case an RTS/CTS session, since this is a peer-to-peer communication. The timeout is caused, because there is no J1939 node with the address 0x33 in the network (and the ADFweb tool acts only as a passive network member).

In order to establish a communication without timeout errors, we need to connect another Arduino node with a source address of 0x33, and in the setup() routine we need to set filters for all three PGNs, software identification (65242), component identification (65259), and vehicle position (65267).

Finally, the result is as expected: 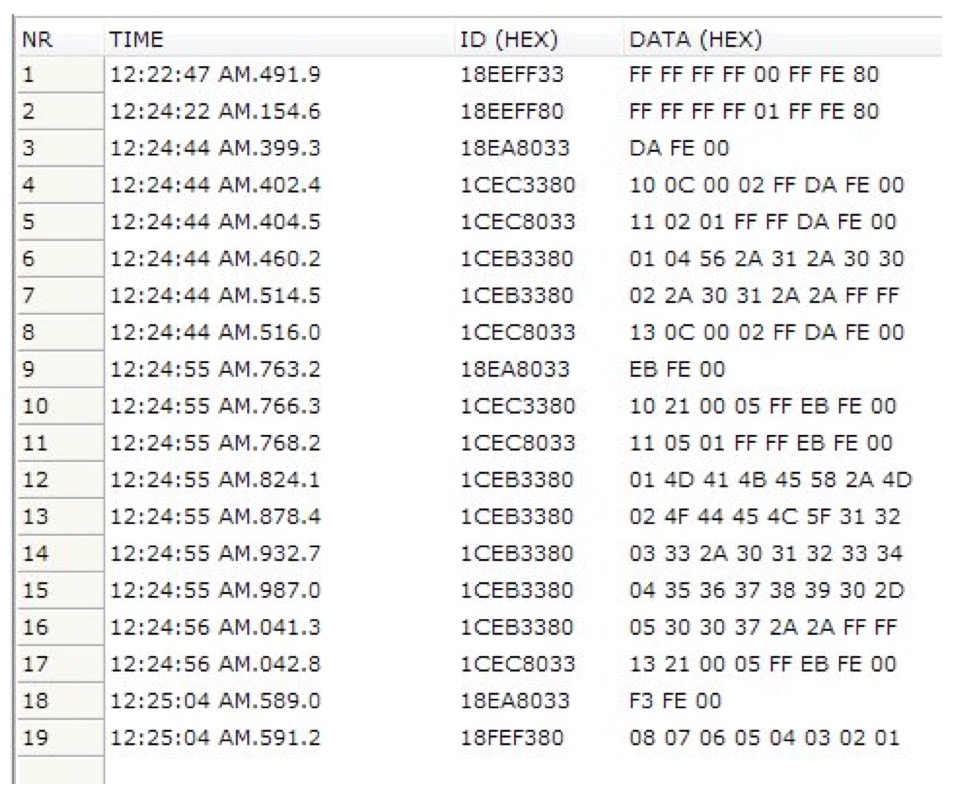