According to SAE J1939/81, network management procedures are used to “collectively manage the network”. The chapters on network management have no logical structure (Again, explaining the function of an automobile, starting with the details of the fuel injection system); they explain the address claim messages first in detail and then follow up with the actual procedure.

In all consequence, the network management is all about the Address Claim procedure and this procedure utilizes three messages and their PGNs:

This first scenario addresses a standard J1939 network startup. Upon powering up (or when requested), an ECU will send an Address Claimed message into the CAN bus in order to claim an address. All ECUs receiving the address claim will record and verify the newly claimed address with their internal address table. In case of an address conflict, i.e. should two or more ECUs claim the same address, the ECU with the lowest NAME value will succeed and use the address as claimed. The remaining ECUs must claim a different address or stop transmitting to the network.

Requesting an Address Claimed message from all nodes in the network and, as a result, determining addresses claimed by other ECUs, is the necessary procedure for ECUs powering up late for various reasons, but especially transitional ECUs. Such transitional ECUs may be diagnostics tools, service tools, and trailers, etc. This approach allows the ECU to determine and claim an available address or to find out which ECUs are currently on the network.

Note: The request for an Address Claimed message supports primarily self-configurable ECUs. The self-configurable addressing feature is not a requirement for all ECUs, i.e. it is optional, but it is highly recommended for those ECUs for which an address claiming conflict is considered to be highly probable.

After completing their Power On Self Test (POST) ECUs (Controller Applications) claiming addresses in the 0 to 127 or 248 – 253 range may initiate their regular network activities immediately, while other ECUs should not begin until a time of 250 ms after claiming an address. This allows competing claims to be resolved before the address is being used.

In the event that two ECUs attempt to claim the same address, the ECU with the lowest NAME value will succeed and use the address as claimed. The remaining ECUs must claim a different address by sending another Address Claimed message containing a different address or send a Cannot Claim Address message.

The destination address for an address claim is always the global address (255) in order to address all nodes in the network.

A node, that has not yet claimed an address, must use the NULL address (254) as the source address when sending a Request for Address Claimed message. 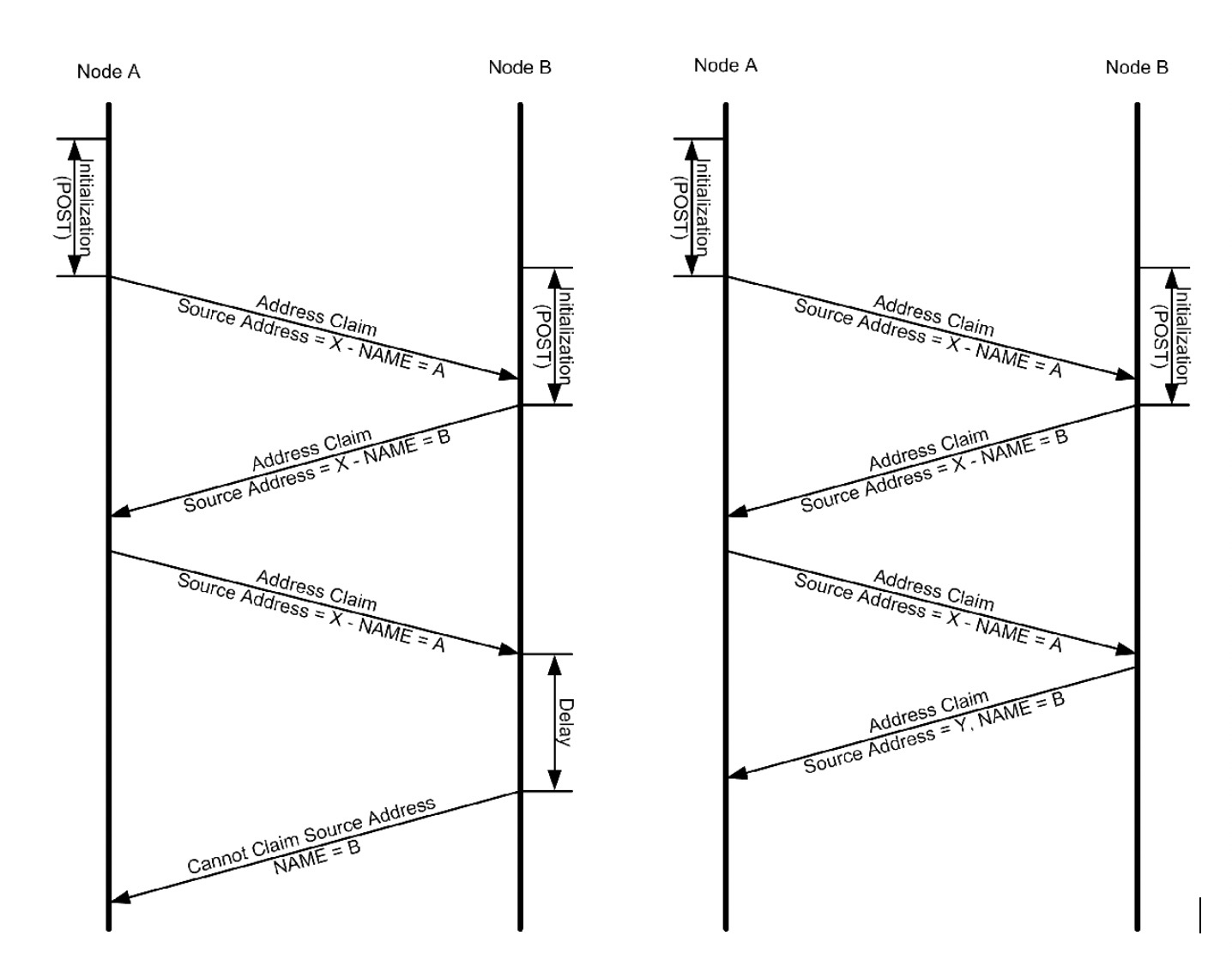 Both scenarios basically show the same: Two nodes, A and B, are claiming the same address; node A has a NAME of higher priority. Node B, in the left scenario, is not a self-configurable ECU, meaning it requires external actions to claim another address.

In the right scenario, node B is a self-configurable ECU and eventually will claim another source address.

The following describes the steps in detail:

The scenario as mentioned may happen when two ECUs try to claim the same source address at exactly the same time. The following picture demonstrates this possibility. 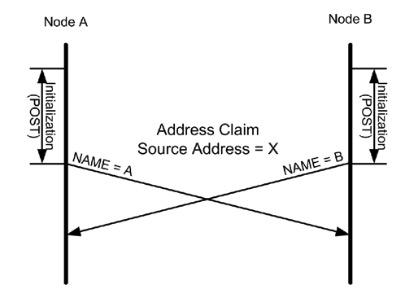 In this example, both nodes, A and B, are powered up at the same time, their Power-On Self Test (POST) takes the same time and both nodes send out their Address Claim message at the same time. The probability for such a situation taking place may be extremely low, but the consequences can be serious.

The CAN standard does not allow a situation where two nodes use the same message ID. This scenario will create a CAN error frame and both nodes will attempt to claim the same source address repeatedly, until both nodes switch into the Error Passive mode which in turn will limit their network communication capabilities. Experience has shown that both nodes will eventually return to normal operation, but the time it takes is first of all unpredictable and proper network function cannot be guaranteed.

SAE J1939/81 recommends an Address Claim Bus Collision Management. The procedure is to check the occurrence of an error frame and to use different delays in both ECUs before they claim their address again. The transmit delay should be calculated by producing a “pseudo-random” delay value between 0 and 255.

Note: SAE J1939/81 explains that, during this process, both nodes would go eventually into BUS OFF mode. However, this statement is not backed up by either the CAN standard (which categorically does not allow two messages with the same ID) or empirical tests.