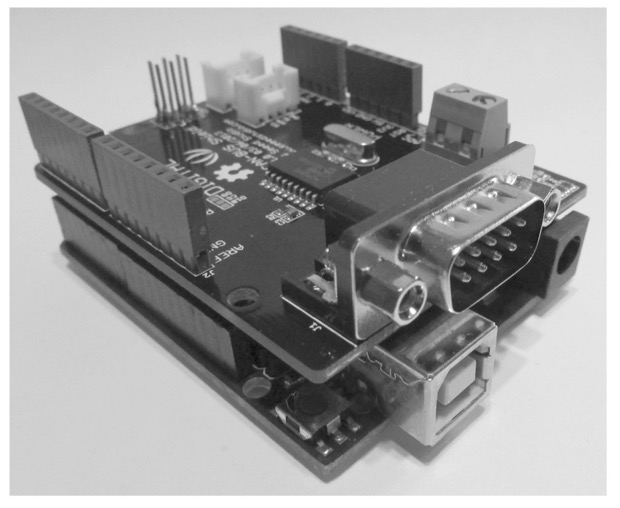 In terms of CAN Bus capabilities, the shield by Seeek Studio provides the same functionality as the one by SK Pang electronics, however, it comes with a much lower price tag, because it does not have any additional components besides the CAN Bus interface.

Note: The Seeed Studio CAN Bus shield was my preferred choice during writing this book due to its compatibility between the two systems I primarily used, the Arduino Uno and Arduino Mega 2560. The Mega with its increased memory resources enabled me to run a full SAE J1939 protocol stack on the Arduino platform, whch is not possible with the Uno.

Over all, the device makes a solid impression, especially since the CAN connection is according to standard and in addition provides CAN connectivity through easily accessible terminals.

All technical information regarding the use of the CAN controller can be found on the company’s wiki website.

To order the Seeed Studio CAN shield, you can use the following resources (or browse for “Arduino CAN-BUS Shield” for further options):

Note: The Seeed Studio CAN bus shield has been undergoing some hardware changes to become compatible with systems such as the Arduino Mega 2560. The version 1.0 will work with the Arduino Uno, while all higher versions also work with the Mega 2560. This will also affect the code of the Arduino projects, specifically the line “MCP_CAN CAN0(10);” in the main module selecting the CS pin. That line must change to “MCP_CAN CAN0(9);” for all CAN bus shield versions above 1.0. I have added a comment in the corresponding section of the code.