As was explained in Chapter 7.1 - Bit Coding the CAN standard uses the Non-Return-to-Zero (NRZ) bit coding, which provides a maximum of data transport capacity, but in turn lacks sufficient means of bit synchronization between sender and receivers in a CAN network.

Bit Stuffing, i.e. the insertion of an additional bit of reversed polarity after a series of bits of the same polarity, provides a higher number of signal edges for synchronization, but, with maximum reliability requirements in mind, Bit Stuffing alone was deemed not quite sufficient.

In order to assure that all receivers in a CAN network read the transmitted frames correctly they are also required to continuously resynchronize the internal time base with the received bit stream.

This is accomplished by continuously adjusting the bit sample point during each bit time. The purpose of bit timing synchronization is to coordinate the oscillator frequencies in a CAN network and as a result provide a system wide specified time reference.

One topic that had not been addressed so far is: When exactly does a receiving CAN node read the bit information?

As shown in a random example in picture 7.3.1.1 the bit sample point is located somewhat close to the end of the actual bit time in order to compensate for signal propagation delays in the CAN network plus delays within the actual CAN receiver/transmitter circuits.

Since the CAN standard manages the bus access through bit-wise arbitration, it must be assured that the signal propagation time from sender to receiver and back to the sender must be completed within one bit time.

Note: CAN nodes transmitting a message to the bus also monitor the bus and compare the transmitted level bit by bit with the corresponding level on the bus. Consequently, considering the signal propagation time from sender to receiver and back to the sender is mandatory for bit monitoring.

The determination of the bit sample point, and consequently its positioning, requires an internal detection and simulation of the actual bit time reference.

In order to determine the exact bit sample point the CAN standard partitions the nominal bit time into four non-overlapping time segments as shown in picture 7.3.2.1. 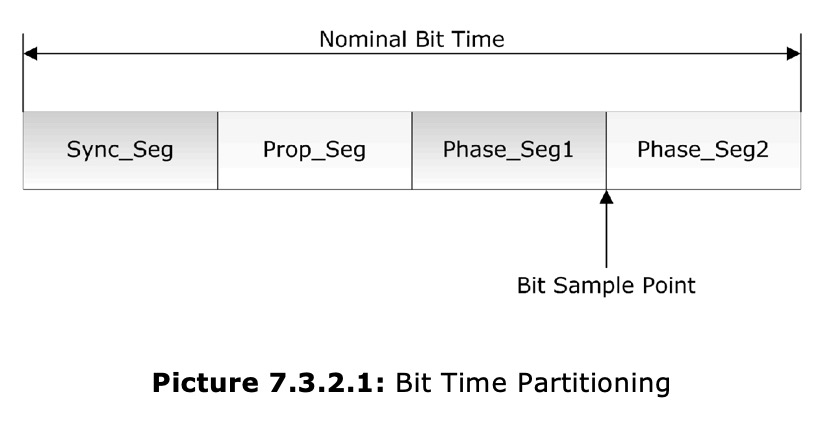 The Nominal Bit Time is derived from the Nominal Baud Rate as shown in equation 7.3.2.1:

The four non-overlapping time segments used for the partition are:

The Resynchronization Jump Width defines the upper limit of the amount that is used to lengthen or shorten the phase buffers.

The Information Processing Time starts with the bit sample point and is reserved for calculation of the subsequent bit level, for instance, after a bus arbitration loss.

The Bit Sample Point is the point in time at which the bus level is read and interpreted as the value of that respective bit. Since the sample point is always at the end of Phase_Seg1, lengthening/shortening the phase buffers will move the actual sample point.

The Internal Delay Time of a CAN node is the sum of all asynchronous delays occurring during the transmission and along the reception path, caused by the bit timing logic units of the CAN controller.