For the longest time, the major misconception about Controller Area Network (CAN) was that it merely applies to automobiles. The truth is, CAN, since its introduction in 1986, proved to be a robust, versatile, and straightforward technology and, consequently, the CAN Bus technology found its way into all areas of applications where microprocessors need to communicate among each other.

Along with its undeniable use in automobiles, CAN applications do not only include industrial automation tasks, but any application where distributed control is advantageous and/or a serial bus system will eliminate excessive wiring. CAN proved to be superior to any other field-bus system regarding low cost, the ability to function in a challenging electrical environment, a high degree of real-time capability, excellent error detection and fault confinement capabilities and, almost contradictory to the previously mentioned features, ease of use.

Nowadays, CAN has no particular niche; its use is universal from any industrial application, space, and aviation, maritime, medical, down to household appliances such as washers, dryers, and even coffee machines.

The ease of use is especially evident for the software engineer responsible for the development of a CAN-based application. The actual CAN Bus protocol, i.e., the entire data communication management, including bus arbitration, error detection, and fault confinement, etc., etc., are implemented into silicon. CAN Bus controllers know per default what to do and how to do it.

For more detailed information about the CAN Bus technology, see:

Although extremely useful in automobiles and small applications, CAN alone is not suitable for machine automation since its communication between devices is limited to only eight bytes. Consequently, higher-layer protocols such as CANopen for machine control, DeviceNet for factory automation, SAE J1939 for offroad vehicles, and NMEA 2000 for marine applications were designed to provide a real networking technology that supports messages of unlimited length and allow a master/slave configuration.

To put it in a nutshell, higher layer protocols are necessary, because:

The most popular higher layer protocols based on Controller Area Network are:

CANopen and DeviceNet are mainly used in industrial control applications. CANopen, however, is to a certain degree also suitable for vehicle applications. Both protocols provide powerful and complete protocol features. Still, it is also safe to say that they are over-engineered, making it very difficult to understand them in their entirety.

SAE J1939 is a very ingeniously designed protocol that takes a resourceful advantage of the CAN 29-Bit message identifier. Rather than relying on a myriad of protocol functions, SAE J1939 uses predefined parameter tables, which keeps the actual protocol on an understandable level. SAE J1939 is a prime example of sound American engineering according to the KISS principle (KISS = Keep It Simple, Stupid!), but it is nevertheless at least as useful as CANopen or DeviceNet.

See also:  Embedded Networking with CAN and CANopen...

NMEA 2000 is a marine networking standard created by, and administered by, the National Marine Electronics Association (NMEA). The NMEA is an association of marine electronics manufacturers, dealers and technicians. NMEA 2000 is a derivative of SAE J1939, i.e. it uses the same protocol features.

PICAN Series of CAN Bus Boards for the Raspberry Pi 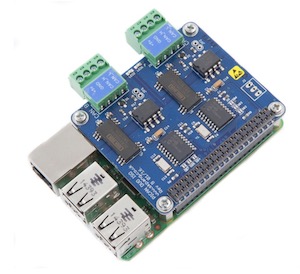 The Raspberry Pi is a low-cost, credit-card-sized single-board-computer connected to a computer monitor or TV and uses a standard keyboard and mouse. It is a small but capable device that empowers people of all ages to discover computing and learn how to develop applications in programming languages such as Scratch and Python. It can perform almost everything you expect from a standard desktop computer, from browsing the internet and playing high-definition videos to creating spreadsheets, word-processing, or playing games.

However, as our product line shows, the Raspberry Pi is also very well capable of supporting industrial applications and prototyping. We at Copperhill Technologies keep a focus on CAN Bus (Controller Area Network) technologies and higher-layer protocols, such as OBD-II, SAE J1939, and CANopen. The PICAN series of CAN Bus boards for the Raspberry Pi represents a professional and extremely reliable option for CAN Bus development and prototyping.