Renesas introduced its RA4W1, an MCU with an integrated CAN Bus, USB, and Bluetooth 5.0 Low Energy (BLE). The single-chip MCU includes a 48 MHz, 32-bit Arm Cortex-M4 core, and Bluetooth 5.0 core delivered in a 56-pin QFN package.

The MCU and so-called Flexible Software Package (FSP) allow engineers to start development with ARM ecosystem software and hardware building blocks that work out-of-the-box with RA MCUs. The FSP open architecture will enable customers the re-use of their legacy code and combine it with software examples from ecosystem partners. It features FreeRTOS and middleware, offering a premium device-to-cloud option for developers. These out-of-box options can be replaced and expanded with any other RTOS or middleware. 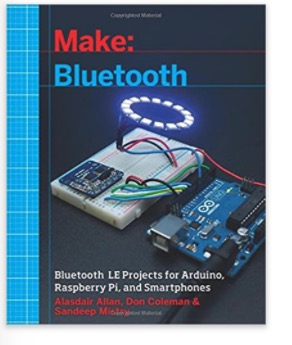 This book is where your adventures with Bluetooth LE begin. You start your journey by getting familiar with your hardware options: Arduino, BLE modules, computers (including Raspberry Pi!), and mobile phones.

From there, you will write code and wire circuits to connect off-the-shelf sensors, and even go all the way to writing your own Bluetooth Services.

Along the way, you will look at lightbulbs, locks, and Apple's iBeacon technology, as well as get an understanding of Bluetooth security--both how to beat other people's safety, and how to make your hardware secure.