App Note: Arduino Due With 2-Channel CAN Bus Prototyping Board 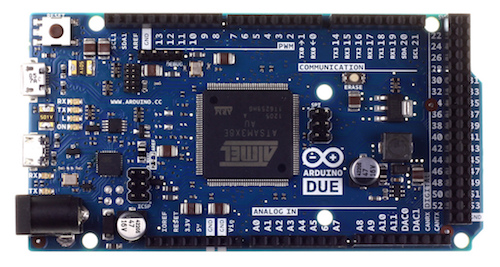 According to the official Arduino website: The Arduino Due is a microcontroller board based on the Atmel SAM3X8E ARM Cortex-M3 CPU (datasheet). It is the first Arduino board based on a 32-bit ARM core microcontroller. It has 54 digital input/output pins (of which 12 can be used as PWM outputs), 12 analog inputs, 4 UARTs (hardware serial ports), a 84 MHz clock, an USB OTG capable connection, 2 DAC (digital to analog), 2 TWI, a power jack, an SPI header, a JTAG header, a reset button and an erase button.

The Due has a 32-bit ARM core that can outperform typical 8-bit microcontroller boards. The most significant differences are:

The USB-to-serial converter of the Programming port is connected to the first UART of the SAM3X. It's possible to communicate over this port using the "Serial" object in the Arduino programming language.

The USB connector of the Native port is directly connected to the USB host pins of the SAM3X. Using the Native port enables you to use the Due as a client USB peripheral (acting as a mouse or a keyboard connected to the computer) or as a USB host device so that devices can be connected to the Due (like a mouse, keyboard, or an Android phone). This port can also be used as a virtual serial port using the "SerialUSB" object in the Arduino programming language.

For more information on the Arduino Due see:  www.arduino.cc 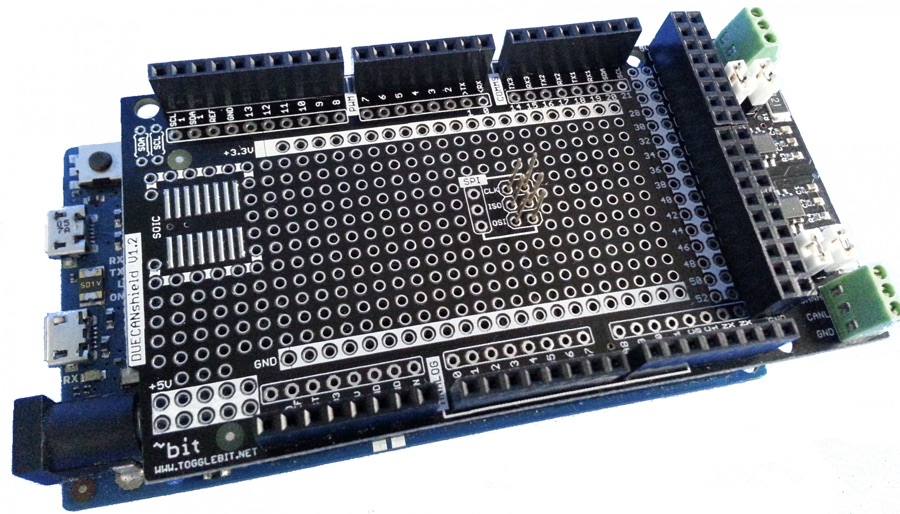 The Togglebit board connects the two CAN channels on the Arduino Due to a real vehicle bus by means of two CAN transceivers, thus eliminating the need for external breakout boards. It also represents one of the very few examples of an Arduino Shield that fills the entire Arduino Due (the Due has the same footprint as the Mega 2560) form factor. However, the entire standard board area is only used for prototyping, while the two CAN transceivers extend the board by about ½ inch (~12.5 mm).

According to the manufacturer: The Togglebit board is a prototyping shield designed specifically for supporting the CAN bus capability on the Arduino DUE. The board incorporates dual CAN transceivers required by the two integrated CAN ports on the DUE while providing a large prototyping area. The shield is pin-for-pin compatible with the Arduino DUE and includes a 3.3V bus, 5V bus, SOIC breakout, full digital breakout, CAN termination resistors and terminal blocks for CAN connections.

For more information and for ordering the board, log on to:

The board is very well suitable for prototyping, and that is its ultimate purpose, nothing more, and nothing less.