Industrial Ethernet Guide - A Brief History of Ethernet and TCP/IP

While working on a way to link Xerox’s "Alto" computer to a printer, Metcalfe developed the physical method to connect devices as well as the standards that governed the communication in the network.

The original Ethernet described communication over a single cable shared by all devices on the network. Once a device was attached to the cable, it had the ability to communicate with any other attached device.

This allowed the network to expand and accommodate new devices without requiring any modification to those devices already on the network. 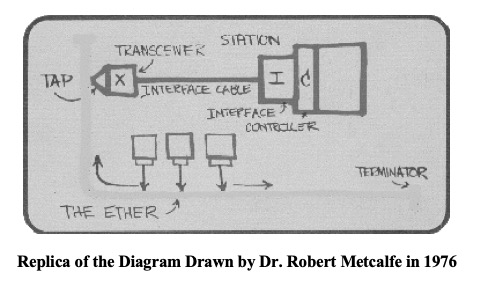 Metcalfe applied techniques of simultaneous listening and mutual speaking on one channel, as it was (and still is) common in radio communication.

Not surprisingly, the name Ethernet is derived from a term in radio technology. 19th-century scientists believed that electromagnetic waves needed a medium to propagate, and they called that medium Ether.

Ethernet has become the most popular and most widely deployed network technology in the world. The Ethernet standard has grown to encompass new technologies as computer networking has matured, but the mechanics of operation of every modern Ethernet network stem from Metcalfe’s original design.

The TCP/IP model (Transmission Control Protocol/Internet Protocol) was also created in the 1970s by DARPA, an agency of the United States Department of Defense.

However, the historic choice for Ethernet plus TCP/IP as a standard protocol add-on (i.e. a higher layer protocol) took place in the mid-1980s when twenty of the largest United States Government Departments, including the U.S. Department of Defense, decreed that all acquired mainframe computers were required to run UNIX as an operating system. UNIX, in turn, supported Ethernet including the TCP/IP add-on.

As a result, most of the commercially available computer systems by companies like IBM, DEC, Cray, Sun, CDC, Unisys, and more, offered relatively interoperable Ethernet and TCP/IP implementations.

It is fair to state that, from a historical view and in today’s world – industrial or household use – the Ethernet TCP/IP marriage is a key combination, but neither one of them would have survived the tides of time without the other.