Ethernet partitions a stream of data into individual packets called frames. Each frame contains source and destination addresses and error-checking data to ensure the detection of damaged data and initiate re-transmission when necessary. 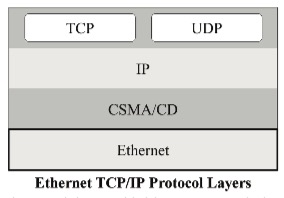 However, it is crucial to understand that most of the protocol control features are added by the layers above the Ethernet (physical) layer. Ethernet takes the data it receives, representing the application data plus several protocol control data, and transmits it into the network.

Too many references use the term “Ethernet” as a general term to describe the entire protocol, where it is essential to give credit where credit is due, and that is to the higher layers such as IP and TCP. 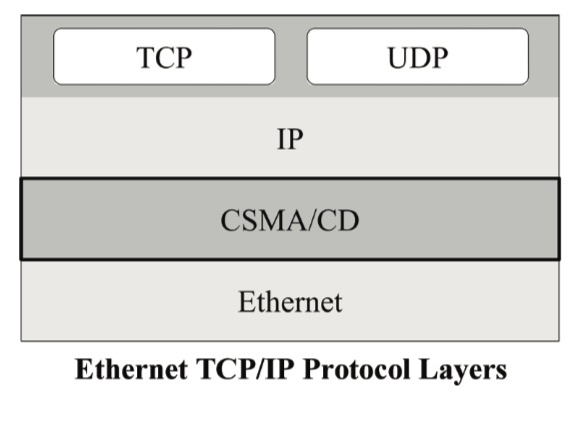 The acronym CSMA/CD stands for “carrier-sense multiple access with collision detection,” and it describes how Ethernet regulates the communication between nodes (devices) in a network. To understand this (almost intimidating) term, it is helpful to look at the individual components.

The portion “multiple access” covers the procedure of a “polite” conversation, meaning it is a proper protocol that one party speaks (transmits data) while all other participants listen (receive data).

Using the same scenario of a polite conversation, it would be an improper protocol to interrupt the speaker (transmitter) and thus damage or even lose the message. “Carrier sense” describes the process of “listening” to the conversation (the physical medium) to determine if another party is still speaking (transmitting). When the medium is quiet (i.e., the conversation ceased), it is the appropriate time for another station to transmit data.

While CSMA is an excellent start to regulate the data communication process, however, it does not cover the scenario of message collision. A message collision can occur when two stations attempt to transmit data at the same time.

“Collision detection” assures that Ethernet nodes listen to the medium while they transmit. If several transmitting nodes detect their transmission in a distorted form, they assume that a collision occurred, in which case they will cease the transmission, destroy their frame, and wait a random amount of time before they attempt to transmit again.

However, the new transmission attempt is preceded by a “carrier sense,” which will determine whether bus access is possible. The random delay between ceasing the transmission and carrier sense makes it unlikely that node transmissions will collide more than a few times in a row.

There is, however, a significant downside to CSMA/CD: As the number of nodes in a network grows and, consequently, the volume of traffic increases, opportunities to gain access to the network decrease.

The number of collisions will increase exponentially, and the probability of getting access within a given length of time decreases dramatically. In the worst-case scenario, when message collisions occur continuously, nodes will dump the message frame and will not attempt a re-transmission.

In review, TCP/IP stands for Transmission Control Protocol / Internet Protocol, and it is a layered protocol where TCP/IP works on top of Ethernet including its CSMA/CD component.

TCP and IP are two distinct protocols, but they are commonly used in a combined way that has become the standard terminology referring to either or both protocols.

IP is the fundamental protocol of TCP/IP. Every piece of data sent per TCP/IP is sent as an IP packet 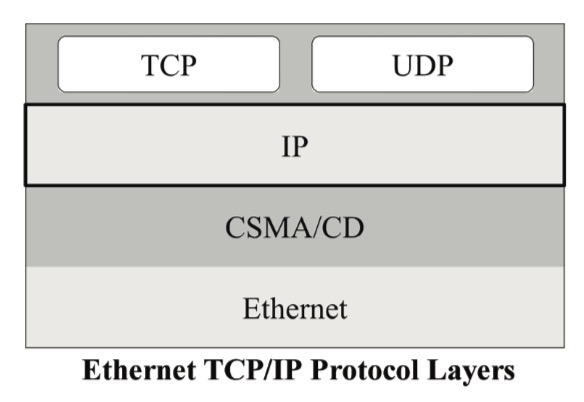 Data on an Internet Protocol network is organized into packets, and each IP packet includes both a header (specifying a source and destination address, and data characteristics) and the message data itself.

While all these characteristics don’t appear attractive to establish a data connection, it is the higher-level TCP protocol that provides the reliability (and thus demonstrating the effectiveness of layered protocol suite).

A protocol field in the IP’s header information identifies which higher-level TCP/IP protocol sent the data. When IP receives data, this field tells which protocol module to pass it on.

The Transmission Control Protocol (TCP) accepts data from a data stream, divides it into chunks, and adds a TCP header, thus creating a TCP segment. The TCP segment is then encapsulated into an Internet Protocol (IP) datagram and exchanged with peers.

In other words, TCP’s primary use is to establish communication between applications. 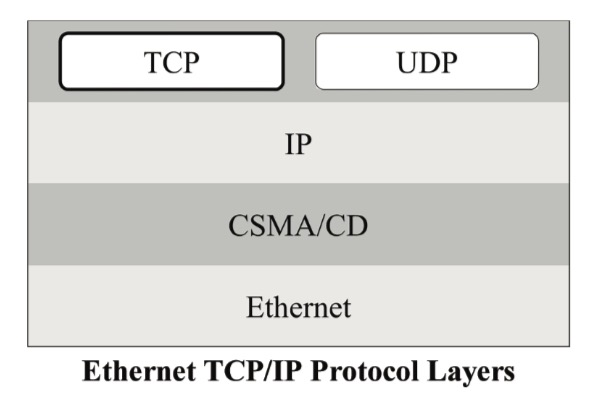 UDP (User Datagram Protocol) is a simple communications protocol that offers a limited amount of service. It is an alternative to the Transmission Control Protocol (TCP) and, together with IP, is sometimes referred to as UDP/IP.

Like the Transmission Control Protocol, UDP uses the Internet Protocol (IP) to transmit a data unit from one network node to another. 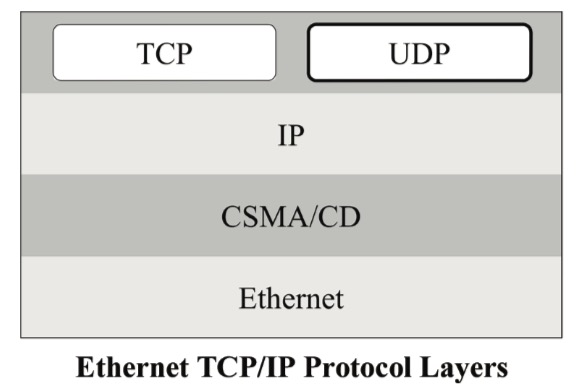 Unlike TCP, UDP does not provide the service of dividing a message into segments and reassembling it at the other end. Specifically, UDP does not provide sequencing of the data packets. Consequently, the application program that uses UDP must assure that the entire message has arrived and that is in the right order. Network applications that need to save processing time because they have small data units to exchange (and therefore minimal message reassembling to do) may prefer UDP to TCP.

MAC (Media Access Control) and IP (Internet Protocol) are the two addresses that identify a computer in a network. They are used to track data packages and ensuring they are transmitted and received correctly.

A Static IP Address is an address, usually assigned by the network administrator, which does not change over time unless changed manually. It is used when there is a need for the IP address or network location to remain the same consistently.

A Dynamic IP Address is temporarily assigned to a device, i.e. the address is leased from a DHCP (Dynamic Host Configuration Protocol) server for a period of time, and when the lease expires the computer will request a renewal or a new IP address.

TCP/IP (IPv4 Standard) uses 32 bits (four numbers between 0 and 255) to address a node (computer) in the network. IP addresses are normally documented as four numbers separated by a period in the form of, for instance, 192.168.1.50.

Each node must have an IP address before it can connect to the network, and that address must be unique. In other words, each IP packet must have the proper address information before it can be sent to another node.

A MAC Address, also known as hardware or physical address, is a unique value associated with the actual, physical network adapter.

The IEEE is also the body that assigns manufacturers their IDs, called Organizationally Unique Identifiers, and the manufacturer assigns the second half, called the Universal LAN MAC address. 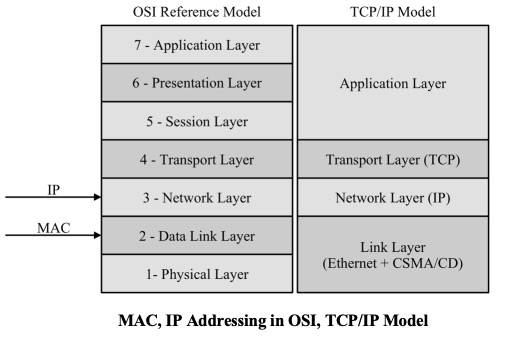 In reference to the OSI Reference Model, MAC addressing is located at the Data Link Layer (Layer 2), allowing computers to uniquely identify themselves at this comparatively low level, whereas IP addressing functions at the Network Layer (Layer 3).