Certain parameter groups may require more than the eight data bytes supported by the CAN standard.

If a program group requires more than eight data bytes (9…1785 bytes) and is defined as multi-packet capable, the data will be packaged into a series of CAN Bus data frames.

A regular CAN data frame includes a data field of variable length, 0 to 8 bytes. The information indicating the transmitted data length is found in the DLC (Data Length Code) inside the CAN Control Field (See following pictures). 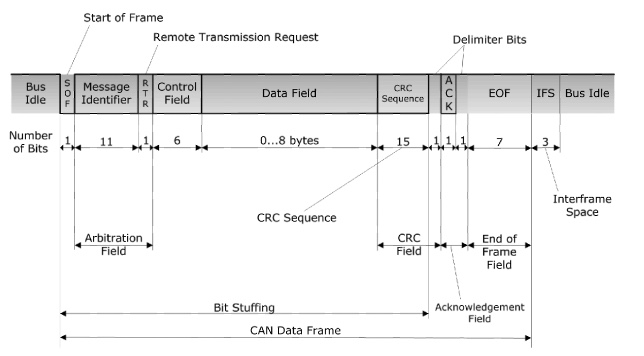 In order to package CAN messages into a sequence of up to 1785 messages (as well as to re-assemble the CAN frames into one data package) the J1939 Transport Protocol defines the following:

The method of using a sequence number plus the remaining seven data bytes yields a total of (255 packages times 7 bytes/package) 1785 bytes per multi-packet message.

The following pictures demonstrate the use of the CAN data field including the sequence number and the packaging of multiple CAN messages.

The data packages are re-assembled in the order of their sequence number and the final data package can then be passed to the application layer.