Experience over the years has revealed some quirks in the CAN Bus protocol, which are naturally not covered by any official document, and one of them has led to the call to avoid CAN remote frames.

In August of 2005, CAN-in-Automation (CiA) published (but not promoted) their application note 802 - "CAN remote frame - Avoiding of usage."

The CAN Bus data and remote frames are very similar. The remote frame resembles a data frame without the data field (which would is located between the Control Field and the CRC Filed).

One source of the problem with the remote frame is based on the way the Control Field, particularly the data length code, is transmitted: 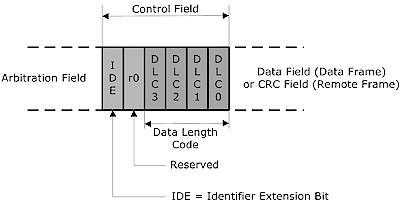 The present problem rests in protocol-incompatibilities between CAN Bus controllers from various manufacturers and how they manage the Remote Frame, which consequently will produce CAN message collisions.

A bus collision may occur under the following conditions:

Remote frames can only be transmitted with a data length code (DLC) identical to the DLC of the corresponding (requested) data frame. Concurrent transmission of remote frames with different DLC's will result in irresolvable collisions, meaning the CAN bit monitoring feature will identify an error. That also means in all consequence that the requesting node must know the correct DLC.

What happens next is the same as when two frames with identical message IDs try to access the bus. The result of such a scenario has so far not been documented in any official literature. The official statement is that such situations are not permitted and will lead to unpredictable results. However, as CiA application note 802 demonstrates, there are quite some discrepancies between the numerous CAN controllers available in the market and how they manage remote frames. It appears that collisions can occur with such a probability that the use of remote frames is not recommended at all.