The following is an excerpt from A Comprehensible Controller Area Network by Wilfried Voss.

The following chapter explains the CAN message frames by bit and bytes. Further chapters will address the mechanism of message broadcasting, the bus arbitration and the actual physical layer.

In the language of the CAN standard, all messages are referred to as frames; there are data frames, remote frames, error frames and overload frames. Information sent to the CAN bus must be compliant to defined frame formats of different but limited length.

Data transfer from one sending node to one or numerous receiving nodes.

Any node may request data from one source node. A remote frame is consequently followed by a data frame containing the requested data.

Any bus participant, sender or receiver, may signal an error condition at any time during a data or remote frame transmission.

Both, Data Frame and Remote Frame, are very similar. Basically, the Remote Frame is a Data Frame without the Data Field. Error frames and overload frames have a different format, which will be explained in more detail in a later chapter. In order to explain the various frames and their differences, it is necessary to have a first look into the CAN serial bus bit by bit.

The following will address data and remote frames and how they, consequently, are distinguished from each other. Both, Data Frame and Remote Frame, are very similar. Basically, the Remote Frame is a Data Frame without the Data Field.

Per definition a CAN data or remote frame has the following components:

The following images shows the CAN frame in more detail: 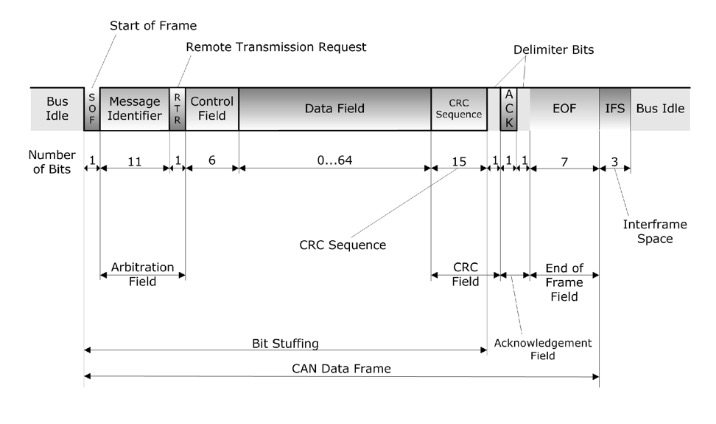 Each CAN message starts with a “Start of Frame” bit (SOF), followed by the message identifier and the “Remote Transmission Request” bit (RTR). This particular bit, the RTR bit, is now the focus in explaining the difference between a Data Frame and a Remote Frame, which are both very similar.

A Data Frame broadcasts a message, the actual data, to the CAN bus, either due to change of an event (for example, the change of an input signal, a timer event, etc.) or as a response to a message request. The data frame, identified by a unique message ID, may be accepted by any number of nodes in the network according to the individual application needs, but can only be transmitted by the (one and only) node associated with the data message.

RTR in a Data Frame

Between the Start of Frame (SOF) bit and the end of the message identifier, both frames, Data Frames and Remote Frames, are absolutely identical. A Data Frame is detected by a low (dominant) RTR (Remote Transmission Request) bit. Each receiving node in a CAN network, when detecting a low RTR bit, will now know that the received message is a Data Frame. In fact, the RTR bit is part of the arbitration portion of a message frame.

The above image shows the complete Data Frame. Since the Data Frame and the Remote Frame are built very similar, a detailed description of both frames’ building stones is provided in a dedicated section, Chapter 4.5 - Message Frame Format.