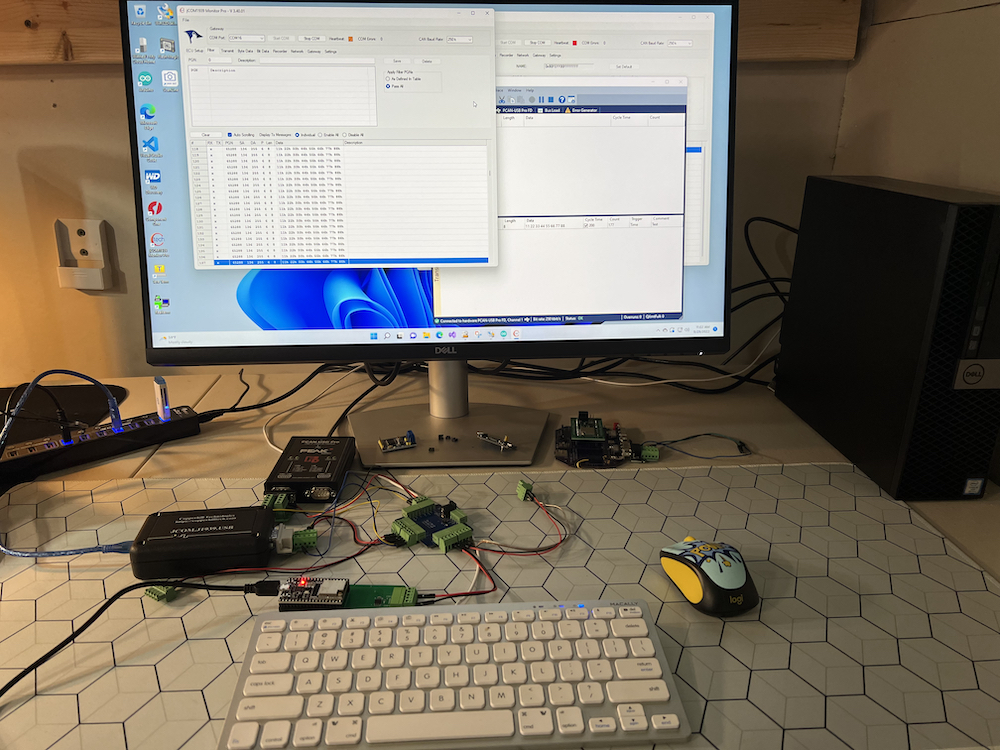 The above image shows my SAE J1939 test setup with a total of three nodes, all connected through our CAN-Bus Hub with 7 Ports and DC Power Connection. They are:

The PCAN-USB Pro is set up in Trace mode, i.e., it is in mere monitoring mode.

Today's task is to demonstrate the simulation of the SAE J1939 Request Message.

A node, receiving a request, is required to respond in any event, even when it means to send a negative acknowledgement (NACK) when the requested PGN does not exist (See also chapter Acknowledgement). A global request will not trigger a NACK when a particular PGN is not supported.

For more detailed information about the SAE J1939 protocol, see  A Comprehensible Guide to J1939.

In our test setup, we have assigned one node (associated with the COM16 port) as the message responder as shown in the following image:

In the next step, we set up the second node (associated with the COM4 port) as the message requester as shown here:

As soon as we transmit the Request Message (node 130), node 128 responses:

To verify the functionality, let's have a look at the PCAN View trace data window:

Our SAE J1939 gateways allow you to monitor, simulate, and record any PGN defined in the SAE J1939-71 Standard and diagnostic messages according to SAE J1939-73. Furthermore, they support the full SAE J1939 network management functionality, including request messages, address claims, and more. 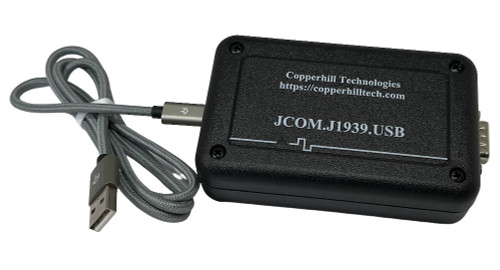 The SAE J1939 to USB Gateway utilizes our SAE J1939 ECU Simulator Board With USB Port and embeds it in an enclosure. The SAE J1939 gateway allows you to monitor, simulate, and record any PGN as defined in the SAE J1939-71 Standard but also including diagnostic messages according to SAE J1939-73.

As they say, a picture tells a thousand words. The above image demonstrates a predicament we encountered a few days ago. The enclosure we are using for our SAE J1939 Gateway And Data Logger With Real-Time Clock is not available at the moment, and it might take a few more months before new supplies arrive. At [...]

SAE J1939: Simulation of Analog and Digital Signals with the JCOM1939 Monitor Software

I want to reiterate a point made in a previous post ("A Beginner's Guide to SAE J1939 Embedded Software Development"): When developing and testing your CAN Bus application, may it be Classical CAN, CAN FD, CANopen, SAE J1939, or NMEA 2000, you need to connect your device to a functional network. One solitary node connected to your [...]

Modern vehicles have electronic control units (ECUs) to control various subsystems such as the engine, brakes, steering, air conditioning, and infotainment. These ECUs (or ‘controllers’) are networked to convey information and output measured and calculated data to each other.This in-vehicle network is a data goldmine for improved maintenance, measuring vehicle performance and its subsystems, fleet [...]

Our N2K-BT gateway functions as a NMEA 2000 to Bluetooth data scanner for any host device with a Bluetooth or BLE (Bluetooth Low Energy) port, such as PCs, phones, or tablets. Therefore, it supports operating systems such as Windows, Linux, iOS, Android, and more. In addition, the wireless communication protocol employs easy-to-read and easy-to-process ASCII [...]

The EC44 Agri control unit by Epec (Finnland) supports Isobus communication for agriculture applications. In addition, the device can upgrade existing systems to Isobus connectivity when used as a gateway. The Isobus-compliant device allows plug-and-play compatibility between tractors and other agricultural equipment (e.g., seeders or fertilizers) from different manufacturers and brands. Legacy implementations operated via customized human-machine interfaces (HMI), i.e., [...]

Axiomatic, a designer and manufacturer of electronic controllers and power management converters, introduced their AX180800 temperature scanner that monitors up to 20 thermocouples and two RTDs. The device features two SAE J1939 interfaces. The channels are independently configurable as Type J, K, B, E, N, R, S or T thermocouples, measuring exhaust, winding, and fluid temperature. All temperature data are [...]

The following is a follow-up on our post  Controller Area Network (CAN), SAE J1939, NMEA 2000 Wireless Module for IoT and ELD Applications. The CAN Bus, SAE J1939 and NMEA 2000 to Bluetooth Gateway is the first product of a new series of wireless gateways for IoT (Internet of Things), ELD (Electronic Logging Devices), and other applications. At the [...]