A report, "The World Market for Industrial Ethernet," by the independent UK-based research organization, IMS Research (now part of HIS Inc.), contained data about the total quantity of installed Ethernet nodes.

The analyses were divided into regions, product groups, and industries. According to the study, EtherNet/IP had the largest market share with 30%, followed closely by ProfiNet with 28%. Modbus/TCP is used in 22% of the applications and Ethernet Powerlink in 11%.

All other systems together made up for the remaining 9%. The SERCOS III market share was shown as 0.0%. The data was collected using the sales figures for devices from 16 representative groups of industrial commodities.

ProfiNet and EtherNet/IP combined were estimated to account for 60.9% in 2008. This was forecast to increase to 64.3% in 2013. The report’s author suggests this may imply that the market power of the two manufacturers, Siemens with Profinet and Rockwell with EtherNet/IP, will increase their influence over the Ethernet technologies used.

The report estimated that over half the Ethernet nodes deployed in most industrial automation applications were of the standard Ethernet TCP/IP variety (such as Ethernet/IP incl. Modbus/TCP). However, new installations of dedicated industrial variants (such as EtherCAT® and Ethernet Powerlink) were projected to grow by 40% from 2008 to 2013. Different regions have different dominant suppliers, so there is a considerable regional difference in which variant is chosen. 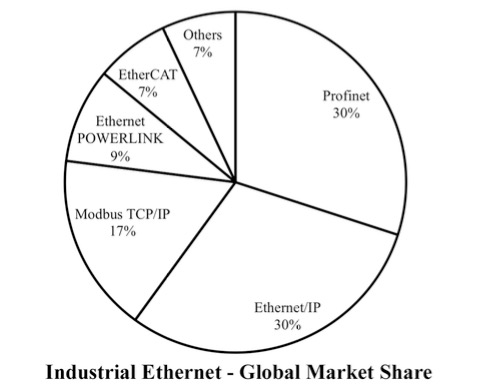 This means that industrial Ethernet will account for 45% of networked nodes connected in process industries in 2016, up from 39% in 2011. The study also confirms that ProfiNet and Ethernet/IP have a leading position, both having a market share of 30% of the globally established Industrial Ethernet solutions.

The leading group includes ProfiNet, Ethernet/IP, and Modbus/TCP. Together, this group covers more than three-quarters of the market. The EtherCAT and Powerlink variants, which focus mainly on drive technology, have a market share of 7% and 9%, respectively, according to the study.

IMS points out that “networking is becoming more of a commodity, which means that remote monitoring and control is more accessible.” They also state that the vast majority of remote terminal units and distributed-control systems are already networked. About 95% of new units are expected to be network-enabled in 2016. One reason is that networks are being viewed as a means of bringing visibility to manufacturing data.

Another study by the Aberdeen Group, Boston, found that manufacturing executives ranked manufacturing data transparency as a top business task. Moreover, Aberdeen found that the best-performing manufacturers used network capabilities to their advantage. The top performers showed improved operating metrics than their competitors in areas such as operating margins, downtime per year, and cost of ownership.