Ethernet switches are of significant importance when it comes to the total prevention of bus arbitration (CSMA/CD) occurrences, may it be for Ethernet TCP/IP or some (but not all) Industrial Ethernet protocols such as Ethernet/IP and Modbus/TCP.

The elimination of the bus arbitration process can be accomplished through a simple network design modification, i.e., by assigning each node its collision domain.

Such a configuration will result in an optimum reduction of data traffic and avoidance of bus arbitration (CSMA/CD) occurrences since each node in the network occupies its port on the switch. The switch, in turn, acts as the ultimate network traffic controller. 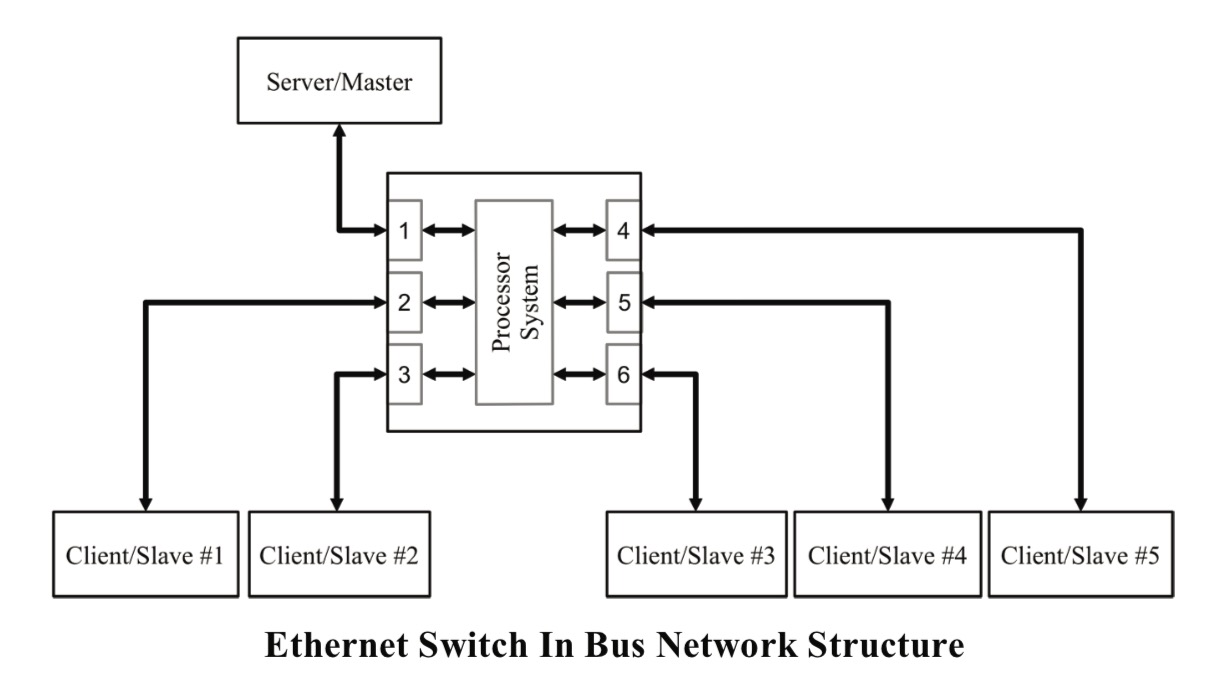 However, the configuration, as shown above, would not be able of delivering a total elimination of CSMA/CD if it was based on the original Half Duplex Ethernet as introduced in 1985. Occasional message collisions would still plague the communication between the switch and the individual nodes. In all consequence, a switch in a half-duplex network would only reduce the probability of CSMA/CD occurrences but would not necessarily decrease it to zero.

To eliminate CSMA/CD, the network including the switch must support full duplex Ethernet (a virtual standard for modern networks) as described in the following chapter.

Note: Industrial Ethernet protocols such as Ethernet/IP and Modbus/TCP depend heavily on the use of Ethernet switches; otherwise, they would be (per default) useless for real-time control.

However, switches add latency per message to a network (According to current technology, 7.5 microseconds in the best case; more than 10 microseconds is standard). The impact on the cycle time depends on the network load. In all consequence, Ethernet switches are disadvantageous when it comes to achieving hard real-time performance.

In review, devices operating in a half-duplex network cannot send and receive data simultaneously; a device can only send or receive. In half-duplex, one node sends the frame, and all other nodes in the collision domain listen for the frame. In this scenario, nodes will compete for bus access, and their frames may collide with other frames in the network.

Message collisions can only be prevented when the bus access is controlled on a higher level.

As a result, full duplex communication for Ethernet was standardized in 1997 as IEEE 802.3x. It allows nodes to receive and transmit simultaneously; however, only two devices can be connected on a single full duplex link, either in a node-to-switch or switch-to-switch connection.

Theoretically, full-duplex Ethernet can double the available network bandwidth, but in reality, it is limited by the internal processing capabilities of each node in the network.

A network configuration with full duplex communication and full-duplex switch, also known as Switched Ethernet, provides each node with its individual “collision” domain that completely avoids collisions, even ignoring the traditional CSMA/CD protocol.