Distributed Control, and the advantages that come with it, is best demonstrated through the classic, lean Bus network structure. There are, however, several different network topologies that serve virtually the same purpose but, at the same time, have their individual characteristics that are advantageous to Industrial Ethernet networks.

Network topology is the arrangement of the various elements (links, nodes, etc.) of a computer network. It is the topological structure of a network, and it can be described physically or logically. Physical topology refers to the placement of the network's various components, including device location and cable installation, while the logical topology shows how data flows within a network, regardless of its physical design.

In the following, the focus will only be on those topologies pertaining directly to Industrial Ethernet.

While almost inconsequential for Industrial Ethernet as a physical topology, a reference to the classic Bus topology is worthwhile since it adequately describes the principle of distributed control.

Each node (including the master/server) in the network is connected to a single bus line using a single cable.

Data from the source travels in both directions to all nodes connected to the bus until it reaches the intended recipient. In the same sense, the Bus topology is best suited for message broadcasting, i.e., all nodes receive the data packages simultaneously. It also allows direct node-to-node communication without the involvement of a master/server device.

Since the bus technology consists of only one cable, it is inexpensive to implement compared to other topologies, but the single cable can also be the single point of failure that may cause the breakdown of the entire network. Also, a bus topology requires termination resistors at both ends of the network to prevent signal reflections. 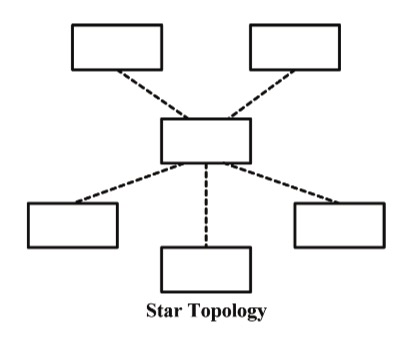 In Star topology, every node (computer workstation or any other peripheral) is connected to a central node called hub or switch. The switch is the server, and the peripherals are the clients.

The network does not necessarily have to resemble a star to be classified as a star network, but all of the nodes on the network must be connected to one central device.

All data that travels through the network passes through the central hub, which prevents direct node-to-node communication. 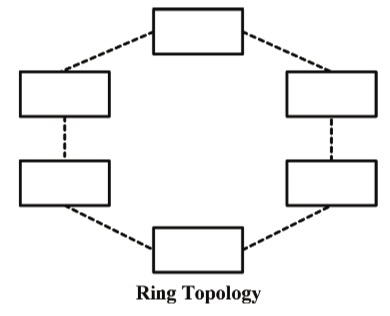 The Ring topology is set up in a circular fashion in which data travels around the ring in one direction and where each device acts as a repeater to keep the signal strong as it travels.

Each device incorporates a receiver for the incoming signal and a transmitter to send the data on to the next device in the ring. Thus the network depends on the ability of the signal to travel around the ring.

When a device sends data, it must travel through each device on the ring until it reaches its destination, which makes every node is a critical link.

This drawback can be rectified through a bidirectional data transfer, which not only increases the network reliability (one cable break will not shut down the network) but also allows pinpointing the location of a cable break (somewhere between two nodes) per diagnostic software.

If the ring breaks at a particular link, the data can be transmitted via the reverse path, thereby ensuring that all nodes are always connected in case of a single failure. 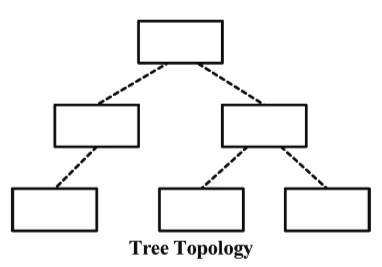 The Tree topology is a combination of Bus and Star topology, and it is based on a hierarchy of nodes. The highest level of any tree network consists of a single, root node.

The root node is commonly connected to multiple nodes in the level below through point-to-point links.

These lower level nodes are also connected to single or multiple nodes in the next lower level.

Tree networks are not constrained to any number of levels, but as tree networks are a variant of the bus network topology, they are prone to dangerous network failures should a connection in a higher level of nodes fail. Each node in the network has a specific, fixed number of nodes connected to it at the next lower level in the hierarchy, and this number referred to as the branching factor of the tree.

The advantages of the Tree topology lie in the ease of scalability (Secondary nodes allow more devices to be connected to a central node) and better manageability since the different network levels provide an easier fault identification and isolation.

Except for star-based networks, the easiest way to add more computers into a network is by daisy chaining them (i.e., connecting each computer in series to the next). If a data package is intended for a node partway down the line, each system passes it along in sequence until it reaches the destination.

A linear topology puts a bidirectional data link between one node and the next. This turned out to be expensive in the early days of computing since each node (except for the ones at each end) required two receivers and two transmitters. 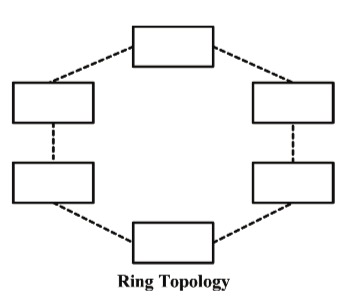 A ring topology can be formed by connecting the nodes at each end. An advantage of the ring is that the number of transmitters and receivers can be cut in half since a message will eventually loop all of the way around.

When a node sends a message, the message will be received and processed by each node in the ring.

If the ring breaks at a particular link, the transmission can be sent via the reverse path, thereby ensuring that all nodes are always connected in the case of a single failure.