As the term Ethernet TCP/IP (Transmission Control Protocol / Internet Protocol) indicates, Ethernet TCP/IP is not a single protocol. It comprises of a full suite of protocols or, in other words,

Ethernet TCP/IP is a layered protocol, where each layer builds upon its lower layer, adding new functionality.

Specifically, the Data Link Layer of Ethernet TCP/IP, represented by the media access control protocol CSMA/CD with its back-off algorithm, prevents Ethernet TCP/IP from being deterministic due to its unpredictable delays and potential transmission failures. 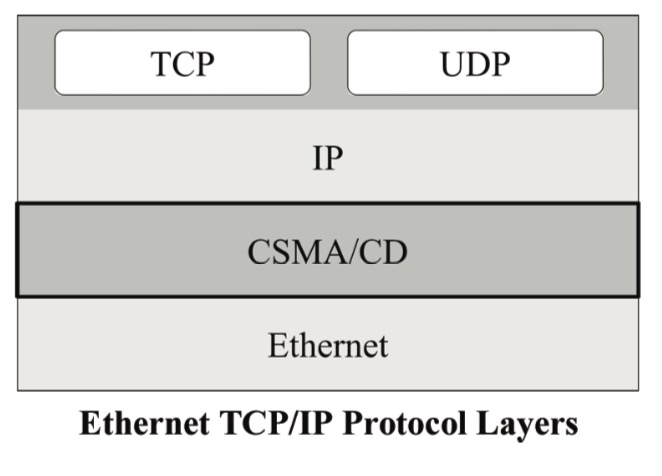 However, the random dwell time before re-transmission is in direct conflict with the definition of determinism and constant cycle time, and, in all consequence, leaves Ethernet TCP/IP useless for hard real-time control.

Also, as the number of nodes grows and, consequently, the volume of traffic increases, opportunities to gain access to the network decrease. The number of collisions will increase exponentially, and the probability of getting access within a given length of time decreases dramatically. In the worst-case scenario, when message collisions occur continuously, nodes (i.e., Ethernet network adapters) will dump the message frame and will not attempt a re-transmission.

In addition to the CSMA/CD issue, the communications protocol UDP and the Internet Protocol (IP) add jitter and non-determinism.

Note: Industrial Ethernet protocols using UDP and IP for real-time communication can still be assumed to support real-time if the jitter is quantifiable, but they will be questionable for hard real-time control, specifically for fast motion control applications (e.g., robotics).

Last, but not least, there is the issue of unpredictable data frame length, i.e., what happens if one node sends out a data frame that is multiple times longer than the preferred cycle time? According to CSMA/CD, only one node can send data, and the transmission cannot be interrupted, not even by higher priority (emergency) data.

All these issues make Ethernet a probabilistic network, as opposed to a deterministic network, in which access time can be reliably predicted.

They are, however, being addressed by the various Industrial Ethernet technologies in one way or the other. The solutions, as described in the following chapters, require either add-on software, or additional hardware, or a combination of both.

Note: Depending on the network design, the occurrence of CSMA/CD can be eliminated by utilizing full duplex Ethernet Switches, which brings pure Ethernet TCP/IP closer to real-time performance. However, these switches have no control in regard to constant cycle times.