Central Control is based on a single CPU burdened with the entire automation task.

Consequently, the data traffic between the CPU and the hardware interfaces is very high. Central Control requires the use of a high-performance (i.e., fast) CPU, especially when it comes to real-time control.

As the blow shown image demonstrates, there are numerous wires required to connect to digital and analog I/O points, motion controllers, and other devices.

These wires, depending on the machine’s dimensions, may cover long physical distances, and they require extensive troubleshooting efforts in case of wiring failures. 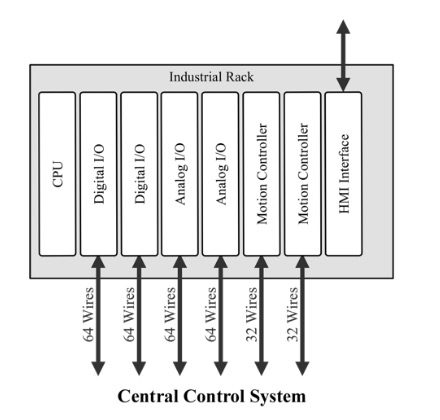 Distributed Control, in turn, utilizes multiple CPUs in a network structure, usually in a Master/Slave or Client/Server configuration. The increased number of processors (CPUs) in the network not only results in higher performance of the automation system but also lowers the required data traffic between the central control (Master or Server) and the underlying devices (Slaves or Clients).

One advantage of distributed control over central control lies in the circumstance that every single node in the network can be physically placed close to the input sensors/switches and the output signal receivers, thus eliminating the need for large cable bundles and supporting cable channels. The great physical distances are usually bridged on the network level, where a typical network requires only two wires to maintain the communication between the nodes.

In other words, distributed control requires less wiring than central control, and it is easier to troubleshoot in case of malfunctions. First, an error can be easily located through the node reporting the error. Secondly, the troubleshooting process is supported by the network communication protocol.

Distributed control also translates into “distributed intelligence.” In this case, "Intelligence" represents the nodes’ capability to accomplish a significant part of their control tasks without support from the central control system. The more these nodes process internally, the less they depend on the speed of their communication means.

This circumstance can be best explained through the interaction between the Main Control (Master) and a network node (Slave), represented by either a “dumb” or “intelligent” motion controller:

In terms of data traffic, it makes a significant difference if the Main System has to communicate every single step of a complex motion profile using a high updating frequency compared to sending just a few data such as speed, acceleration, time, plus the actual start command.

An “intelligent” motion controller reduces the burden on the Main System and even helps to maintain some level of real-time control.

Note: While there are compelling reasons to prefer Distributed Control, Central Control is traditionally better suited for real-time control (See also chapter Real-Time Works Only in a Box).