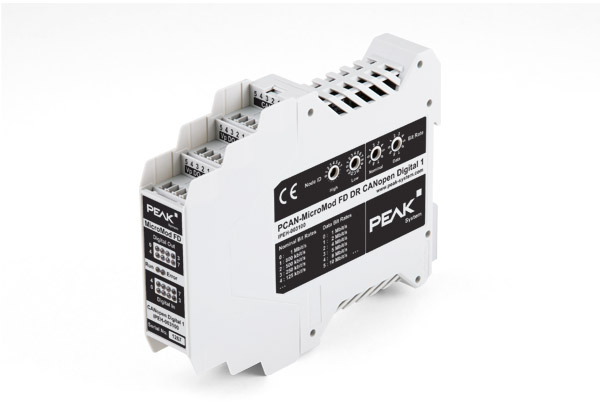 The I/O module comes in a DIN-rail mountable housing with screw terminal strips. The eight digital inputs and eight digital outputs are galvanically isolated from the power supply, with an isolation voltage specified as 100 V. The digital data comply with the IEC 61131-2 standard and own a Type 3 characteristic. The digital outputs on a high-side switch basis can manage up to 500 mA each. Mechanisms such as thermal protection, short-circuit detection, and open-load detection improve the reliability of the outputs.

The CAN FD interface facilitates classic CANopen according to CiA 301 as well as CANopen FD (CiA 1301) communication. The CANopen FD protocol implementation is currently undergoing certification by CAN in Automation (CiA). All CANopen FD devices are required to pass this conformance test, while not needed for Classic CANopen interfaces.

The user can choose the node-ID and the bit-timing utilizing rotary switches. It is possible to operate either the CANopen FD or the Classic CANopen protocol stack. CANopen FD applies the SDO (service data object) protocol and the USDO (universal SDO) protocol to access the object dictionary of a CANopen (FD) device. 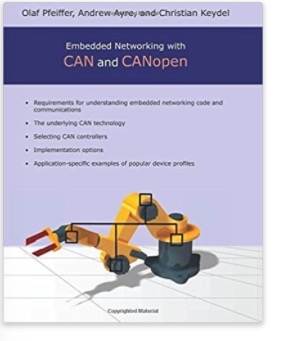 CAN (Controller Area Network) is a serial communication protocol that was originally developed for the automobile industry. CAN is far superior to conventional serial technologies such as RS232 in regards to functionality and reliability, and yet CAN implementations are more cost-effective.

CANopen, a higher layer protocol based on CAN, provides the means to apply the ingenious CAN features to a variety of industrial-strength applications. Many users, for example, in the field of medical engineering, opted for CANopen because they have to meet particularly stringent safety requirements. Similar requirements had to be considered by manufacturers of other equipment with very high safety or reliability requirements (e.g., robots, lifts, and transportation systems).

Providing a detailed look at both CAN and CANopen, this book, written by the founders of the Embedded Systems Academy, examines those technologies in the context of embedded networks. There is an overview of general embedded networking and an introduction to the primary functionality provided by CANopen.

Everything one needs to know to configure and operate a CANopen network using off-the-shelf components is described, along with details for those designers who want to build their CANopen nodes. The wide variety of applications for CAN and CANopen is discussed, and instructions in developing embedded networks based on the protocol are included. Also, references and examples using MicroCANopen, PCANopen Magic, and Vector's high-end development tools are provided.