Given all the technical aspects of Ethernet TCP/IP, including its strengths and weaknesses, that have been presented thus far, the critical engineering mind may challenge the need for sophisticated Industrial Ethernet protocols.

After all, all Industrial Ethernet protocols benefit from the vast speed of Ethernet TCP/IP. Random delays due to CSMA/CD can be rectified through Ethernet full duplex switches. The impact of jitter added by IP and UDP allows, at a bare minimum, soft real-time control, which would cover the majority of industrial applications.

Also, when it comes to addressing unpredictable message lengths contributing to the non-deterministic behavior, it should be possible to add techniques to the Ethernet TCP/IP suite of protocols ensuring the timely delivery of messages.

However, Modbus/TCP not only demonstrates the fuzziness when it comes to explaining the transition from Ethernet TCP/IP to Real-Time Industrial Ethernet[1]; it also proves the limitations of mere Ethernet TCP/IP through its limited performance in comparison to other, more sophisticated protocols (See also chapter Comparison of Industrial Ethernet Protocols). For instance, Modbus/TCP can easily exceed cycle times of 100 milliseconds, which, at first glance, may render it useless for high-speed applications such as motion control.

Ethernet/IP, developed by Rockwell, is based on a similar design and therefore shares the same technological disadvantages as Modbus/TCP when it comes to hard real-time control.

Note: Modbus/TCP and Ethernet/IP represent the earliest versions of Industrial Ethernet protocols, and they were developed and introduced with a focus on networking the manufacturing facility.

However, yet again applying the critical engineering mind, standard Ethernet TCP/IP (and thus Ethernet/IP and Modbus/TCP) can support hard real-time control when the requirement for a real-time network is replaced in favor of dedicated real-time system components. In simple terms, apply real-time where real-time is needed. 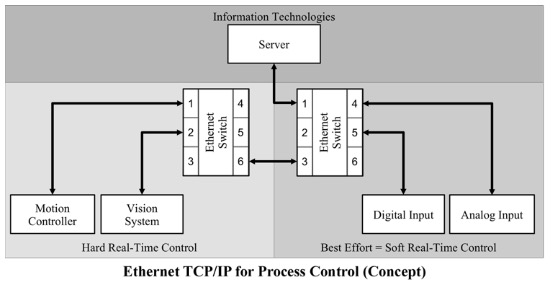 In this concept, as shown above, the responsibility for real-time control is with the end devices (in this example, the motion controller and the vision system), not the network.

The downside of this concept may be increased system design efforts, but on the upside, the network load (data traffic) will be lower as are the performance requirements (and costs) for non-real-time components.

A myriad of successful Ethernet/IP and Modbus/TCP installations plus a 47% global market share (as of 2013) prove the concept’s validity. For instance, Ethernet/IP utilizes several extensions to the IEEE 802 standard to improve its real-time performance. According to ODVA, the Ethernet/IP user organization, a subset of the Common Industrial Protocol (CIP), called CIP Motion, adds real-time, closed-loop motion control to Ethernet TCP/IP/UDP to enable multi-axis and distributed motion control applications. Other modules improve synchronization accuracy.

Considering all these aspects, the question remains: What separates Industrial Ethernet from the standard Ethernet TCP/IP?

Note: Any activities/development targeted at adding software modules to the Ethernet TCP/IP protocol suite to improve its real-time capabilities is equivalent to developing an Industrial Ethernet protocol. 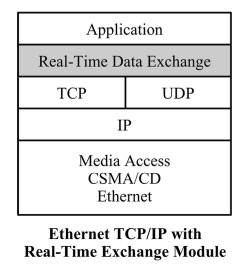 In that sense, both Ethernet technologies, Modbus/TCP and Ethernet/IP (with its multiple IEEE 802 add-ons), are categorized as Industrial Ethernet protocols.

Consequently, the availability of various Industrial Ethernet protocols in the market renders the application of mere Ethernet TCP/IP for industrial automation as economically irrelevant.

[1] Out of mere curiosity, the author searched through the Internet to find a definition by experts in the field describing the difference between Ethernet TCP/IP and Industrial Ethernet but found not a single, satisfactory explanation.